'Soon as you touch the bags you're greeted by rats' 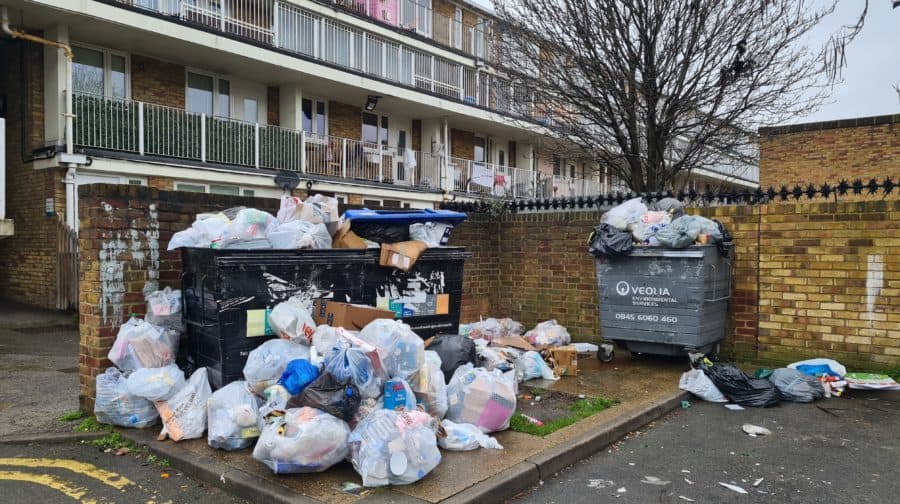 Weeks without regular bin collections have turned Southwark’s streets into a ‘rubbish tip’ overrun with rats say residents appalled at the faltering service throughout the cold snap.

As the News has reported, around a third of waste collection staff are currently off sick or self-isolating due to COVID-19, putting huge pressure on the service.

Bermondsey resident Maria Lanzalaco told the News recycling and rubbish is piling up by her block in Snowsfields.

“Southwark insist they will collect within three days. They don’t come, so I leave it outside until next week. Landlords then complain to us.

“Now I just take it out myself to the paladin in the car park of Bermondsey village Hall. But that is often full.

“I’m too busy to go through the rigmarole of logging this every single week online.

“The website doesn’t allow you to add all the dates. It’s impossible to speak to anyone.”

She said Rock Grove Way, where her mother lives in sheltered housing, is also ‘disgraceful’ with rats running around the strewn and overflowing rubbish.

One reader Tweeted us this picture of Beech House in Rotherhithe’s Ainsty Estate, saying their area had missed out on three weeks of collections.

It was a similar situation at Wrayburn House in Dickens Estate, which has had no collections for more than two weeks, with residents reporting rats since collections were cancelled due to bad weather last week.

Another frustrated resident from St Saviour’s Estate, Michael Paolillo, said: “I understand we are in a pandemic but this is a service that must keep ongoing.”

He said that although he was only speaking for his area, he felt the council had “let down the whole of Southwark”, as while still being charged for the service it was “clearly not getting done”.

“It’s been like this for months just got worse and worse. There is no way COVID can be blamed as other services have kept going without issues.”

He says the filth is so bad in his estate he now dreads using communal lifts and staircases because of the grim, and no longer enjoys going for a daily walk with his three children.

In Camberwell, Karen Jacobs said she was terrified emboldened rats, now living in overflowing bins, would soon get into her house.

She moved into the property on January 25 and despite stumping up more than £300 council tax for February and March has yet to see a single collection.

“The rubbish is piling up and the foxes are ripping open the bin bags leaving mess everywhere,” she told the News.

“Obviously we clean up the mess, and we bleach outside by the bins and where the rubbish is, but soon as you touch the bags you’re greeted by rats.”

Describing the situation as “disgusting and unhealthy” she said the council had also blamed the problems on snow, ice, staff sickness and told her to fill in the missed collection form online – all to no avail.

In the most bizarre excuse yet, she claims one call handler tried to tell her that her street had not been visited because it simply did not exist.

Many residents have taken to Twitter to complain, including those with rubbish sitting outside since January.

.@lb_southwark didn’t collect any rubbish or recycling from our street last week. This was the state of our waste collection point (serving just six flats, but no doubt housing the refuse of many more by this point) yesterday. Praying it’ll be cleared up tomorrow. pic.twitter.com/82Hm898PSZ

Hey @lb_southwark what has happened to the Landells Road rubbish collection this week. Drowning in 16 days of recycling and counting…

Tooley Street east of Tower Bridge is now a public health hazard – no refuse collections since January. The ground floor of our own building is now overflowing with refuse and the poor porter can't get any communications from @LBSouthwark. Shocking! @coyleneil @kieronjwilliams

@lb_southwark what’s going on with bin collections in Camberwell? We haven’t had one since 25th January – reported several times but no response. #rubbish everywhere! ?

Our part of East Dulwich is like a rubbish tip! They came by today for the general waste collection but nothing for the recycling – which is now a week overdue! ?

Hey @lb_southwark This is what the end of Lorrimore Road SE17 has looked like for the last fortnight. No sign of a collection, and in order to pit the stuff on the ground in the bin we kinda need some empty bins? #Rubbish pic.twitter.com/zGTr9zBaod

In an e-newsletter sent out to residents last week, Tooley Street officials said:  “We apologise for the recent disruption to waste and recycling collections.

“Unfortunately our teams faced a double challenge last week, with the bad weather compounding the impact of COVID on members of our staff, many of whom are unwell or self-isolating.

“We are doing all we can to return to a near normal service by the beginning of next week.

Residents are urged to report collections more than 24 hours late online via the council’s website.

Rats have been having a field day during the pandemic, with fewer street waste collections, and more household rubbish due to lockdown playing a part.

According to the British Pest Control Association, rodent sightings have risen by 41 per cent. It is believed that the rat population grew by a quarter in 2020 in Britain – to around 150 million.

What I found odd about the council’s excuse for not collecting, is that we haven’t had any weather that should hinder collections. Snow didn’t settle on the roads and yes it was cold, but not cold enough that engines stopped working. People isolating is one thing, be methinks the other reasons given are completely fabricated.

Keiron Williams’ first serious job as leader of the council and he has failed miserably. And this is the man who non stops tells us what an awful job the government with the global pandemic. Can you imagine Southwark council in charge of fighting Covid. Now that is frightening.

Keiron Williams’ first serious job as leader of the council and he has failed miserably. And this is the man who non stops tells us what an awful job the government are doing with a global pandemic. Can you imagine Southwark council in charge of fighting Covid. Now that is frightening.