Latin Elephant, who wanted to speak about the plight of Elephant and Castle traders still without premises 14 months after being displaced, have also complained after being told they probably would not speak at the council assembly 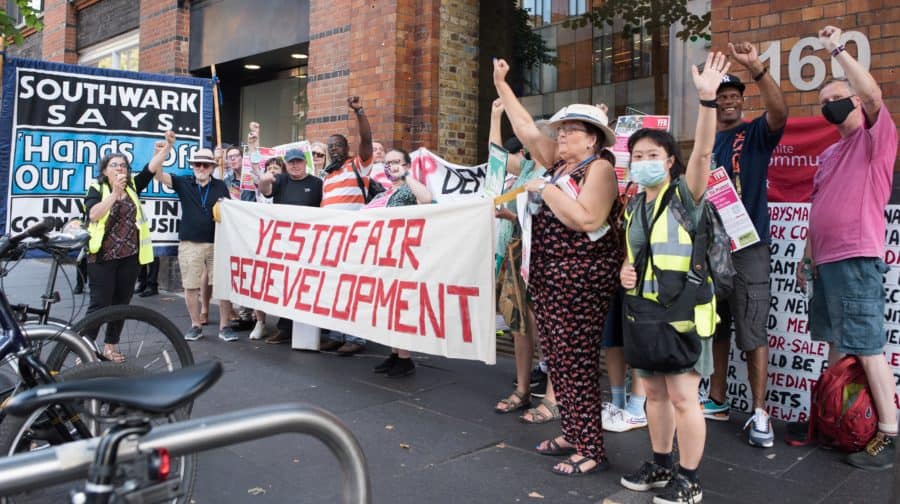 An anti-infill protest at Tooley Street

An umbrella group for Southwark’s tenants and residents groups has hit out at the council after “ironically” being denied the opportunity to tell councillors of residents’ concerns about consultation on infill and rooftop building projects, write Kit Heren and Charles Harrison…

The Southwark Group of Tenants’ Organisations (SGTO) applied to speak at the borough’s council assembly on Wednesday evening to bring forward complaints from many residents that their voices are not being listened to when the council is putting together proposals for new homes on existing estates.

Seven groups including SGTO applied to speak at the meeting. Rules say that three groups should normally be allowed to speak, although this can be suspended so that councillors can hear from more people.

SGTO was told that its speech was highly unlikely to be heard at the assembly. The groups who don’t speak were invited to speak at the council’s cabinet meeting on December 7, a council spokesperson said.

The council also told Latin Elephant, who wanted to speak on behalf of displaced Elephant and Castle traders, that their application was turned down because they had applied too late to speak.

But SGTO said it sent in its application on October 8, nearly seven weeks ahead of the meeting and before every other group.

SGTO said it was told by the council that the consultation topic was too similar to speeches given at the previous assembly in July by residents of the Bell’s Gardens Estate and Dodson and Amigo Estate, both slated for infill projects.

But resident concern about consultation on infill projects is still high-profile, and SGTO has rarely been denied a chance to speak at council assembly meetings, said Jack Lewis, the group’s campaign and research officer.

He added that it was “perhaps ironic” that SGTO’s speech would have addressed council accountability about its new homes programme, and yet the council “don’t seem to want us to hold them to account.”

A statement submitted by SGTO ahead of Wednesday’s council assembly read, in part: “High standards of consultation are required to establish genuine consent from existing residents to new housing developments within their estate.”

Mayor of Southwark, Cllr Barrie Hargrove said: “I am sorry that SGTO cannot have a deputation at tonight’s Council Assembly due to time constraints. But I was glad to learn that they will be heard at December’s Council Cabinet meeting.”

It comes after eighteen new socially rented homes were approved last Monday night (November 24) on the Slippers Place estate on Southwark Park Road in Bermondsey, despite concern from councillors at the planning meeting that consultation had not been good enough.

But Southwark’s council housing boss Stephanie Cryan told the News earlier this month that officers do listen to residents’ concerns, pointing to the Bell’s Gardens infill scheme in Peckham, which was updated to include only social housing after an outcry from people already living on the estate.

She admitted that the council’s consultation efforts had been “stymied by Covid”, with residents’ meetings largely having to move to video calls during the lockdowns. This appeared simply not to work for many residents of Southwark estates, who either have limited internet access or, perhaps because of age, are unused to taking part in video calls.

“We are looking at more engagement, and thinking about things like ‘can we do more targeted door-knocking’, things that make it easier for people to engage,” Cllr Cryan said.

“I know it doesn’t always seem like it but I am there to listen,” she added. “I won’t drop the schemes if these are things we need to develop, but I will take some time.”

The great ‘infilling’ debate in Southwark: Every estate where new developments are proposed or already underway

Meanwhile Latin Elephant, a group representing the displaced traders from the Elephant and Castle shopping centre area, were also told they weren’t able to speak at November’s full assembly.

The group, along with the Southwark Law Centre, wanted to speak on behalf of the roughly-40 traders who they say are still without premises more than a year on from the demolition of the shopping centre last year.

Following a four year campaign to protect their shops, the group were not successful in preventing the demolition of the shopping centre – but a relocation fund of £634,700 was guaranteed in the agreement.

Among those protesting are the longstanding and formerly successful businesses Pricebusters and La Bodeguita, who say the amount is not enough.

Rakesh Patel of Pricebusters said: ‘We have been trading at the Elephant for 35 years, ever since the shopping centre opened. We were the biggest DIY shop in the area and sold things people cannot get anywhere else.

“We are have had long negotiations with Delancey and Lendlease and have made some progress, but there is still a big gap between us. The costs of setting up new premises are astronomical and the amount we are being offered from the relocation fund set up to help us is simply not enough.

“We still need much stronger support from the Council.”

Diana Sach of restaurant La Bodequita added: “We trusted Southwark Council and Delancey to help us with the relocation, but have been very disappointed. We have spent many thousands of pounds designing new premises and storing equipment while we have had no premises.

“La Bodequita is more than a restaurant. It is part of Elephant and Castle and part of Latin American life in London.”

They were told they would probably not be able to speak because they applied too late.

Harpreet Aulja, from Southwark Law Centre, said: “We will be very disappointed if the Assembly chooses not to hear from the traders’ deputation.

“Livelihoods and businesses are at stake. These displaced traders have not been able to trade for 14 months and they need Southwark Council’s help now.”

A spokesperson for Delancey said: “The relocation process involves extensive work to source and fit out new units, and we have worked closely with traders in doing this. Pricebusters and La Bodeguita are no exception; we have been working with them for number of months to ensure their relocations are successful.

“We have offered Pricebusters additional support for their move to Elephant Park and are working closely with La Bodeguita on their fit out designs for their new prime location on Castle Square.

“We want to see our traders succeed within a thriving community at Elephant and Castle. We will continue working hard on progressing the relocation process as effectively and swiftly as possible, as well as supporting all those traders who have already relocated.”

Cllr Helen Dennis, Southwark Council’s cabinet member for climate emergency and sustainable development, said: “We have always been clear that the redevelopment of the shopping centre should not be at the expense of Elephant and Castle’s vibrant and diverse culture, with both traders and wider communities benefiting from plans for the area.

“This should include the successful relocation of Pricebusters and La Bodeguita, who require much more support than is currently on the table. We simply cannot allow these traders to be left behind. The council remains steadfast in actively working with them and the developers to find a solution.”