‘It’s not all big wigs and bling bling’

Behind the scenes of Southwark’s growing passion for Irish dancing 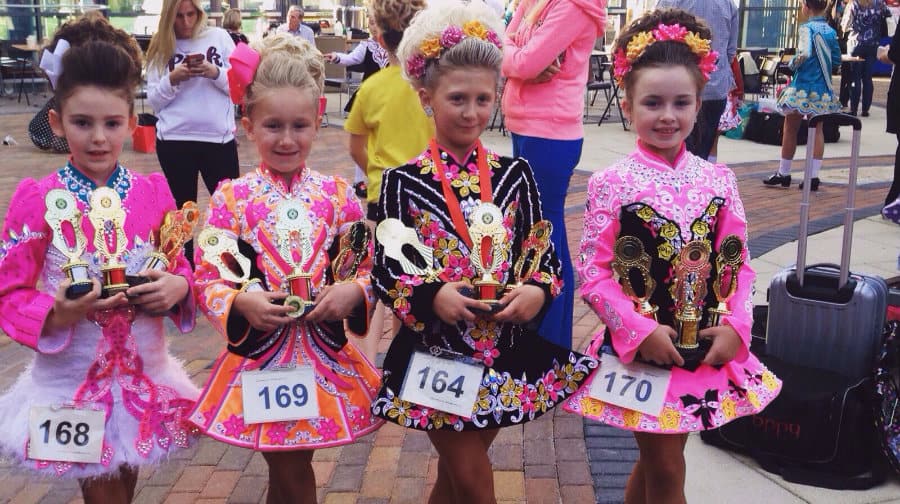 What most people know about Irish dancing you could fit on the back of a special edition Riverdance stamp and it would probably just read ‘Michael Flatley’.

But now Kids all over the country, including well over a hundred in Southwark, are signing up in their droves to take part in the super-competitive, bank account-breaking hobby which has overtaken ballet in popularity worldwide.

Behind the scenes of this traditional art-form there are ever-expanding wigs, dresses which take weeks to make and cost three months’ salary, hours and hours of gruelling practice and sock glue- because saggy socks lose you points.

The winners take to the podium at the Great Britain Championships

Fourteen-year-old Lolly Mulhull from Camberwell is hoping to follow in her teacher’s footsteps as she prepares to qualify for the World Irish Dancing Championship next year.  As a child Lolly found out one of her second cousins was in Riverdance and ever since she has followed the world champions like they were pop stars, including Deborah Whelan, who earned her crown back in 2002 and is now teaching in Dulwich.

Lolly practices for more than ten hours a week to build up the stamina and technique necessary to beat the hundred girls she dances against in her age category at a regional feis (pronounced fesh –Gaelic for arts festival).

“People always relate it to Riverdance but there’s another side that nobody really understands – the technique, the time and the work you put into it. People think you just go up on stage and do it – it’s like training for the Olympics,” said Lolly, adding that there is nothing she would rather do of an evening than dance practice.

Asked if she minds wearing the big wigs, the heavily embroidered dresses, fake tan and stage make-up, Lolly said it was “one of the best parts about it.”

Lolly’s dress, costing £1400, is decorated with crowns as her former World Champion teacher, Deborah Whelan’s once was

There are a number of international Irish dancing organisations, which each hold their own competitions. By far the largest is ‘An Coimisiun’ or ‘Commission’ where the sheer numbers of dancers taking part across England, Ireland, Scotland and America mean the standard at competition level is intimidatingly high. There are two Commission schools in Southwark – the Deborah Whelan Dance School and the Hopkins Academy – and one school, the Carragher Academy, which belongs to a smaller breakaway organisation known as CAID.

At Commission competition level, dancers are split up in to different age groups to perform a ‘heavy round’ of traditional steps in hard shoes and a light dance of more balletic-style moves in soft shoes.

Children under twelve are not allowed to go up on to their toes to prevent any damage to their growing feet and full stage make-up is also the preserve of the older girls.

“It’s a lifestyle choice, “said Lolly’s teacher Deborah Whelan, who was just fifteen-years-of-age when she was crowned World Champion.

“They all become a little family because they spend so many nights and weekends with each other,” said Deborah of her dancers. “They’re in a little Irish dancing bubble and they’re completely dedicated to it. They have to in order to be good at it.”

The time the kids put in to practicing after school and competing all around the country at the weekends is matched only by their parents.

The handmade dresses, embroidered with thousands of swarovski crystals cost up to £3,000 and take weeks to make.

It’s not uncommon for girls, or rather their parents, to fork out up to £3,000 for a single dress, which will last six months at competition level. They take weeks to make, and are embroidered with thousands of Swarovski crystals before they are fitted to the dancer.

Then there’s a pair of new shoes at £120 a pop needed every few months, £150 a month for the lessons, competition entrance fees and the travel. Last week parents from the two Commission schools in Southwark shelled out nearly a grand each to get to and stay in Scotland for the long weekend to support their competing children.

Lolly’s mum Joanne said it is like “a full time job but we love it. The mums love it as much as the kids. It’s like another family.”

With thousands of people attending national competitions like the Great Britain Championships held last weekend in Scotland, Irish dancing is like a world within a world and Deborah says she understands why people looking in could draw parallels with beauty pageants. “I completely understand someone from the outside saying ‘what’s this?  Tanned legs, curly wigs and make up?’ But you have to watch a competition to appreciate the sheer technique that goes into Irish dancing. They have to be fit and the foot work and technicality is amazing. There is an element of a beauty pageant to it but it’s a serious sport and these kids work seriously hard. It’s amazing what they can do for their age.”

Students at the Hopkins Academy practice their jumps

A Camberwell-born girl herself, Deborah says the hours of dedication it takes to become a champion kept her off the streets and ultimately got her a place in Lord of the Dance which took her all over the world.

“There’s so much that comes at the end of it. Once they reach eighteen, the shows touring the world – there are so many options open to them on the back of it.”

Sarah Hopkins, who also runs a Commission academy in Dulwich and Herne Hill, said she was “astonished” by the dedication shown by one of her eight-year-old students who decided not to go away with her family this summer on holiday so she could stay here with her nan and keep up with her practice.

Sarah says she also thinks that kind of dedication pays off in the end as she was able to travel the world with Riverdance when she was younger.

Deborah has tipped one of her nine-year-old students, Maisie Ryan of Rotherhithe, to be a future champion since she won the Open Championships title earlier this year. “Maisie is one of my best. She will definitely win a world,” said Deborah.

Asked if a nine-year-old should dedicate so much of her time to one thing, mum Katie Boyd said:  “If Maisie didn’t want to go I wouldn’t take her. I’m not going to waste my money on something she doesn’t want to do.”

“I worry constantly about how I’m going to pay for it, of course I do,” she added, “but she really enjoys it. They’ve got to be dedicated and it’s non-stop but she loves it. I don’t think she’ll stop now, it’s a part of her life.”

On Saturday October 31 the Deborah Whelan Dance School is holding a fundraiser to pay for equipment and fees for the kids to compete in international competitions all over Ireland, Europe and America. Temple Bowling Club in Herne Hill has donated their venue free of charge for the Halloween themed event, where the students will perform their latest routines. Tickets £10, children go free.

A young winner from the Hopkins Academy

Dancers have their legs spray tanned to bring out the definition in their muscles, like body builders do.

Southwark NewsNews‘It’s not all big wigs and bling bling’