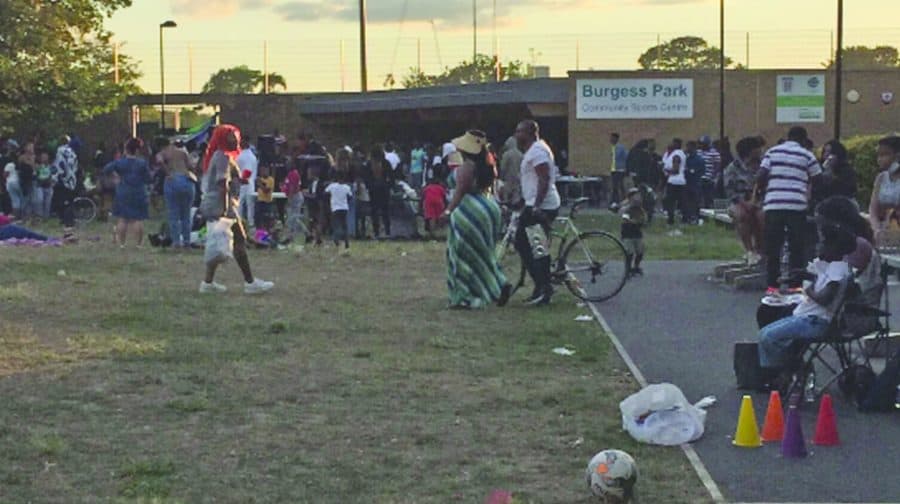 Large gatherings in the park on Saturday (c) AJM Photography

Hundreds of people are continuing to gather at loud parties in the unfenced park in Walworth on an almost daily basis.

As the News has previously detailed, complete with large speakers and club-style sound systems, the raves are unbearable for those living in the vicinity, not least due to the disgusting amounts of rubbish left behind – including human excrement. The park has already been the scene of several violent attacks, including a series of stabbings during lockdown and rowdy events that quickly got out of hand.

On Saturday (August 1) riot vans rolled in after a 100-strong gathering turned violent. One person was seen with a knife and two people were later arrested for affray and possessing offensive weapons.

A section 35 dispersal notice was put in place from 6.26pm until 7am the following day, covering the park and large chunks of residential streets nearby.

Later the same night, in a separate incident, a man was knifed at around 10.30pm. One person was arrested on suspicion of GHB.

Police helicopters overhead are now a nightly occurrence for hours at a time.  Residents are also being blocked in by visitors using nearby roads as makeshift car parks and intimidated when they challenge anti-social behaviour. The News has been contacted by several who have appealed for the car park to be sealed off in the hope it would deter visitors, and those who claim the police’s response has been light-touch and focused on dispersing but not arresting those flouting the rules. One caller described it as ‘lawless’ night after night.

On the facebook page for Friends of Burgess Park, one resident, Julie Piper, said: “We’ve been putting up with this since lockdown started and the authorities don’t do anything about it, the police might go in but they’re back the night after till 4.30am and make a hell of a noise when they leave.”

Stella Young described living near the Peckham Square end of the park: “The noise and music playing for hours and hours gets to me sometimes.

“It seems that what some people don’t understand is that while they can sprawl on the grass and enjoy the music they can move away when they want. We can’t.

“We have to put up with it and it can become overwhelming.”

While Karen Dyer said she was ‘exhausted’ with the ‘slow form of torture’ from sleep deprivation through the twin effects of party noise and sirens and the hum of helicopters overhead.

“It’s unbelievable that it’s been allowed to continue for this long,” she said.

“Does Southwark Council have a duty of care to us residents over noise pollution?

“I honestly get into my bed and cry proper tears with frustration that I’m unable to sleep and then have a repeat of it all the next day.”

Another resident said after finally losing his patience he confronted a group blasting noise with their speakers, only to find himself arguing  with people who still refused to budge.

Meanwhile, an area of the park that had been tidied and repaired by volunteers last week was once again left trashed.

Chief Superintendent Colin Wingrove, the Met’s Southwark and Lambeth commander, told the News that dealing with unlicensed music events and focusing resources on tackling violent crime were his ‘top priorities’.

“We are getting a lot of calls about unlicensed music events and try to have an early intervention approach,” he explained.

“A lot of the unseen work is trying to prevent them from happening, which we are doing in conjunction with the council.

“We always respond to those calls and have a dedicated team of officers manning the phones and another team attending the events.

“Our focus is on the amplified music and large gatherings. Most people will disperse when we go in but we will use dispersal powers available to us. We’ve done this in Burgess Park and we have seized speakers and equipment too.

“We are taking details down and identifying repeat offenders. We will always be proportional about what we do depending on if it’s a family party of 30 people or a mass UME (Unlicensed Music Events) that’s gone violent.”

He said policing events isn’t just about breaking them up but doing the administrative follow-up. This includes identifying people on CCTV and getting neighbourhood policing teams working with the council to target repeat offenders.

Crime may be rising again after lockdown but it still hasn’t reached pre-COVID levels or those seen this time last year, he said.

He attributed the disturbing series of violent crimes to a mix of drug-related gang conflict, an annual summer crime as more people go outside and aren’t in school, lockdown easing, and people turning to illegal raves across London as usual venues remain closed.

“We’ve got more UMEs this year but although we are seeing a continual rise we are not back at the pre-lockdown crime levels, or the same crime levels this time last year,” Wingrove said.

And he is keen to stress more resources are being deployed to the area: “Southwark and Lambeth basic command unit has grown in the last year and we now have 56 additional government funded officers working in both boroughs in a violence suppression unit.

“They made nineteen arrests last week, including thirteen through stop and search, for things like firearm possession, attempted murder and breaching a tag curfew.

“We are still in the middle of a public health crisis. I hope that people will be playing sport and going to the gym, and spending time in leisure centres now they’re open again, instead of turning up to large, unlicensed events where there’s no health and safety.”

Council leader Peter John said the rise in littering and large scale events was ‘unpleasant and upsetting’ for residents.

“Large gatherings of people also increase the risk of another spike in COVID-19 cases, and none of us wants Southwark to return to strict lockdown,” he warned.

“It’s really important that everyone understands the threat is still real, and no-one should be meeting in groups of more than six people from different households, anywhere in our borough.

“In order to support our police colleagues, Southwark Council is monitoring any information about unlicensed music events to help prevent them before people start to gather.

“This partnership has led to a number of planned events being prevented or closed down quickly through early identification.

“Our community wardens service has a dedicated daily presence in Burgess Park and we have CCTV operators also monitoring the area on a 24/7 basis.

“With regards to litter, the council currently has more bins and more staff working to keep our parks clear of rubbish than ever before.

“We are grateful to the vast majority of park users who treat our parks with respect and continue to ask everyone to take their litter home or use the bins provided.”

READ MORE: The News’ view on what needs to happen at Burgess Park

The police are too afraid to do anything . However looks like BLM has not taken off in Southwark

Oh dear all those people in those luxury flats that used to be council houses . The £8 million spent on the park all for their benefit . Lovely new roads and landscaped cycle lanes . But they just forgot to tell you about the locals

@Diana such an ignorant and selfish comment. Been here 30 years and I too am fed up with what’s happened this summer. People are coming from across London to the park and are trashing it, behaving illegally and putting us at risk. You may like. I don’t. Neither do any of my neighbours.

Crack down now! It’s time to fence off the park so it can be closed off at night. This can be reviewed post COVID.