The court heard people filmed him writhing around in agony covered in blood, rather than calling an ambulance 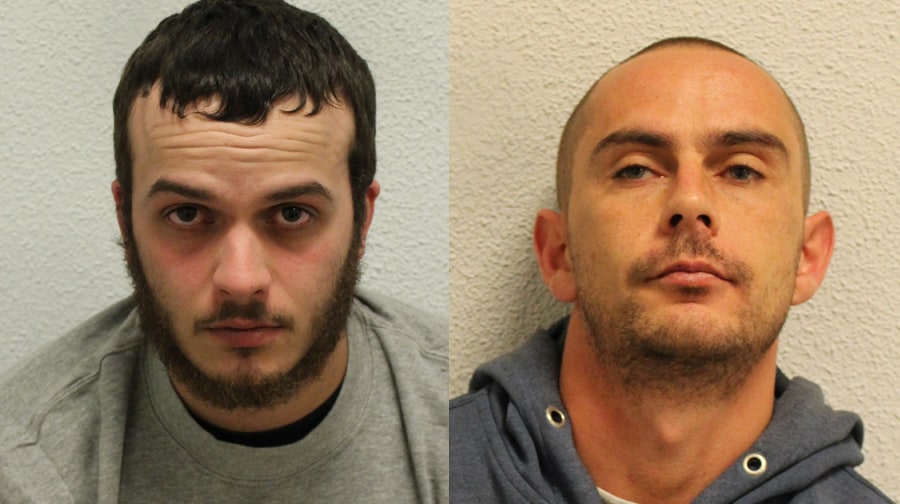 A Camberwell man and his south Bermondsey accomplice, who carried out a terrifying attack on a residential street in Peckham that left a talented boxer with half his face hanging off, have been jailed for 24 and 25 years.

Prosecutor Nicholas Dunham told the Old Bailey that onlookers described seeing the stricken fighter fall out into the road with the left side of his face appearing to be detached from his cheek ‘as if hanging off’.

The court heard that others filmed him writhing around in agony covered in blood, rather than calling an ambulance, and it was only the swift intervention of an off-duty doctor that ensured he received quick medical help.

When he was taken to hospital surgeons removed the remnants of shotgun pellets from his chest and others from his scalp, face and neck.

A single pellet had blinded him in his left eye and others shattered most of his front teeth and broke his jaw.

The Old Bailey heard the victim – a semi-pro fighter – was blasted with a shotgun in a revenge attack for an earlier robbery. The court was told that Kieran Holt, 25, from Camberwell, sought to exact ‘very swift retribution’ after the victim and ‘a number of others wielding knives’ held him up and stole his car on 2 June last year.

The court heard that within two hours he had armed himself and recruited 34-year-old Ian Ford from south Bermondsey to ferry him around Peckham looking for the boxer in his Renault Clio.

The jury were told that another pal, Fredrico Charles, 24, also helped search in his BMW.

When Holt spotted the victim turning his Ford Focus around in Southampton Way, the court was told Ian Ford ‘skilfully’ sped ahead, drawing Kieran Holt’s window level with his target’s as his vehicle was forced to stop.

The gunman fired two shots into the Focus, blowing out the front and rear driver’s side windows and leaving the victim with horrific face and chest wounds.

In a series of recorded telephone calls from prison between Holt and friends following his arrest, the court heard how he chillingly mocked the victim and asked for photos of his injuries ‘to hang on my wall’.

Explaining the motive behind the shooting, he was heard saying: ‘That yute tried rob me in the morning for my whip’, adding later in another chat that he was ‘embarrassed.’

‘My man thought he was the man,’ he said in another call, adding: ‘I had to shut him down.’

Of the videos that circulated afterwards he bragged ‘That’s what man gets’ and asked: ‘If you see him try and get a picture, innit, to hang up on my wall and that, f**king pr**k.’

He told another pal: ‘Either way, every time he wakes up in the morning and looks in the mirror man ain’t gonna forget my face, bruv.’

Holt pleaded guilty to attempted murder and possessing a firearm with intent to endanger life, while Ford was later convicted of the same offences following trial.

Charles was cleared unanimously of attempted murder but found guilty of causing GBH with intent by joint enterprise, on the basis he knew serious harm would come to the victim but was kept in the dark about the shotgun. He was unanimously also not found guilty of any charge of possession of a firearm.

The trio appeared in the dock last Friday, May 10, where Judge Angela Morris jailed them for a combined 57 years.

“All three of you are known to each other and the link appears to be Mr Holt,” she said.

“It is not suggested by the prosecution that this offence is drug-related.

“What is suggested as the motive for this appalling offence is graphically described by Mr Holt in one of the recorded prison telephone calls, namely that this was a revenge attack”, she said because the victim “had robbed Mr Holt of his car or his car key earlier that day.”

Jailing Holt for 24 years, she told him he was the ‘organiser and orchestrator’ of the attack. Ford, despite not being the shooter, was handed a 25-year sentence by virtue of his contested trial.

Judge Morris told him Holt would not have been able to fire at the victim in such ‘close quarters’ were it not for him and said he had driven in a manner that was ‘tantamount to an ambush’.

Charles was jailed for eight years over his role ‘scouting’ for the victim, but was oblivious to the firearm.

Mr Dunham earlier said that on the evening of June 2 2018 Ford drove Holt in his Renault Clio around the Peckham area looking for the victim, “who had robbed Mr Holt of his car or slighted him some time earlier that day.

“It appeared to have been not long before and then very swift retribution,” he continued

“Mr Charles,” he argued, “remained in close proximity to their vehicle in his BMW and in constant telephone contact with Mr Holt, assisting in the search.

‘Mr Holt was in possession of a shotgun; a fact to which Mr Ford must have been aware.”

The prosecutor said that when Holt and Ford came across the victim driving a Ford Focus in the company of a friend in Southampton Way, “Mr Ford performed a U-turn before speeding after the Focus. Mr Charles drove away in the opposite direction knowing he wasn’t further required.”

He added that as the victim “turned right into Charles Coveney Road, Mr Ford skilfully drove his car in front of the vehicle forcing it to stop and aligning his passenger window with the driver’s window of the Focus.”

He said Holt fired two shots from the Clio, hitting the victim in the face, causing him to lose the sight in one eye and suffer other severe facial injuries, adding that the wounds were “extensive and disfiguring, but not life-threatening”.

He lost the sight in his left eye due to one of the pellets striking it, suffered a fractured jaw and lost a number of front teeth as well as skin from his lips.

The promising fighter trained at the All Stars Boxing Gym in west London and had just returned from a month-long training camp in Dublin.

He declined to assist police in the investigation nor prosecutors during the trial, the court heard.

Another driver whose dashcam captured the shooting and provided the ‘crucial evidence’ which helped snare the assailants was awarded £1,000 by the judge, who praised his ‘exemplary conduct in the face of such a frightening offence’.

Holt admitted attempted murder and possessing a firearm with intent to endanger life and was jailed for 24 years.

Ford was found guilty of the same offences following trial and was jailed for 25 years.

Charles was convicted of causing GBH with intent by joint enterprise and jailed for eight years. The News understands that he is planning on appealing the conviction as the court heard he was in the area at the time, near to where he lives, but was not at the scene of the shooting. He contests that he knew the victim was going to be attacked or joined in the search for the victim.

The family gave the following statement to the News: “The family would like to say that we believe Fredrico had nothing to do with the attack.

“Fredrico was cleared of attempted murder and any knowledge of a gun.

“We believe he has been found gulity of GBH with intent under the joint enterprise rules despite it being proven he was not at the scene at the time of the attack, but because he was in close proximity to it as he lived nearby and because of his association with the co defendants.

“We will continue to support Fredrico to prove his innocence and have lodged an appeal.”