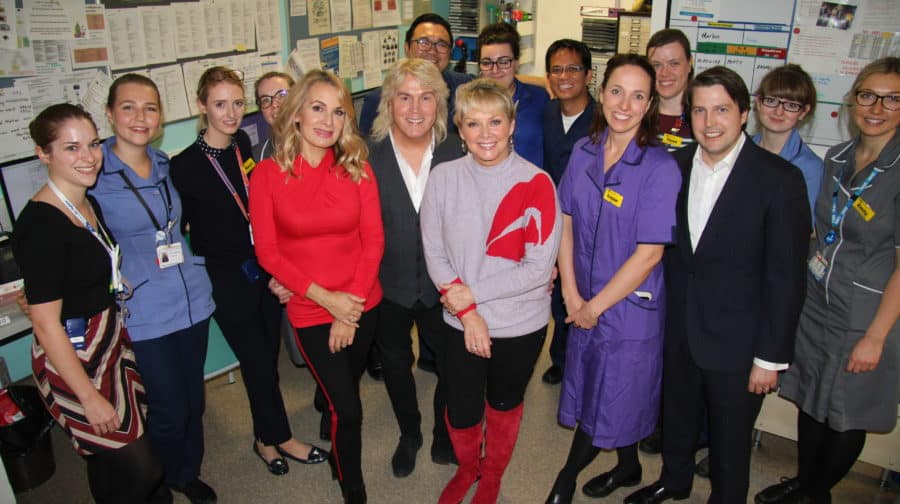 The singer returned to the ward where she spent ten days in July after a seven-hour operation to remove a section of her tongue and lymph nodes to thank hardworking staff – alongside bandmates Cheryl Baker and Mike Nolan.

Jay, who is now cancer-free, began singing again in November after surgeons Alastair Fry and Luke Cascarini performed microvascular surgery to successfully transplant tissue from her thigh to reconstruct her tongue.

The singer of Westerham in Kent said: “I’m here and I wasn’t sure I was going to see Christmas, so I’m very happy.

“It is quite emotional to be back and it’s lovely to see all these faces because for a while I wasn’t talking. I did a lot of writing on boards before I could speak and then the world opened up.

“It has been a bit of a journey and I notice every few weeks that I improve so I wanted to come back and thank everyone that looked after me.”

The star had received her diagnosis while making The Fizz’s new album ‘Christmas with The Fizz’ – but recorded all her vocals before the op, as she wasn’t sure she’d be able to sing again.

Bandmates Mike and Cheryl have also expressed their gratitude, writing on the album’s sleeve notes: “PS from Mike and Cheryl, thank you Guy’s Hospital for giving us our Jay back. We are eternally in your debt.”

Cheryl said: “It was much bigger than just an operation. It was a matter of life and death, as well as Jay’s career.”

Alastair added that the band encouraged people to see a specialist if they had concerns.

“The earlier cancers are caught the more effectively they can be treated so we’d encourage people to come forwards and see specialists if there’s any mouth ulcers that don’t heal in a couple of weeks,” he said.

Surgeons at the hospital modified the operation so the band could still do the famous skirt ripping routine to the Bucks Fizz hit Making Your Mind Up.

Consultant oral maxillofacial surgeon Alastair Fry said: “Conventionally we do an incision from the knee to the hip but we moved it in and up which made it a bit harder to do but less visible for Jay’s work.

“We’re trying to get people through the treatment safely so they can carry on doing what they do. Buy purinethol we want.”

Lizzie Hunt, matron for Blundell ward, where Jay spent time recuperating, said: “Jay has recovered so well and it was great to see her again.

“She was very driven to get home as soon as possible and it’s lovely to hear how Jay is back singing and performing – doing what she loves.”