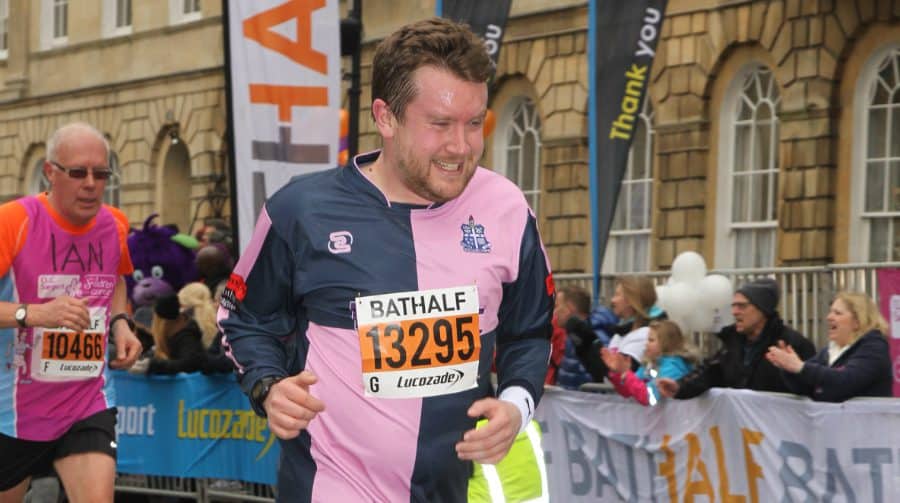 A man who collapsed after a run when his heart stopped beating for fifteen minutes is making a miraculous return to the sport this weekend, this time with a defibrillator strapped to his chest.

Neil Cole was a fit 34-year-old when he blacked out while queuing up to get his time at Hilly Fields park run on New Year’s Day.

In a stroke of luck, which saved his life, among the other runners there that day were two doctors and a lifeguard who started CPR immediately and carried on until the ambulance arrived.

Neil, of Cornflower Terrace in Dulwich, was rushed to King’s College Hospital, where they unblocked his artery and reinforced its lining to make sure it remained clear.

The young financial advisor for UBS Bank was put into a forced coma and given a minimal chance of survival of between two and four percent.

As his family and girlfriend waited anxiously at his bedside they were informed that due to the amount of time his heart had stopped beating, if he did survive, there was a significant chance he would have brain damage.

By January 8 Neil was remarkably awake and fully responsive. He had suffered some short term memory loss rendering December last year a blur and he was disoriented from sedation, which was apparent when he asked his girlfriend how he could escape the video game he was stuck inside.

After 23 days in hospital Neil made a startling full recovery and after months of gradually building up his strength he is now preparing to do a 5km run this Saturday – his first since his collapse.

“I’m taking the positives from it. I know how lucky I am to have survived it,” said Neil, who has since had a matchbox-sized defibrillator (the paddles they pump people’s chests with in hospital dramas) fitted which would give his heart a shock if it ever went into an irregular rhythm again. This is a precaution taken by the hospital because no one fully understands why his artery became blocked in the first place. As a young man who regularly exercised and didn’t smoke, drink or take drugs, his condition has stumped medical professionals.

As the Dulwich Hamlet fan prepares to become a running man once again (with a possible half marathon on the horizon if Saturday goes well), Neil is urging everyone to get trained in CPR as he says he would be dead were it not for his fellow park-runners and their lifesaving actions.

“It’s a life and death scenario. It’s not that difficult but not that many people know how to do it. If my story makes one person decide to do CPR then I’ll have done something important,” he said.