May the force be with you! John Boyega visits Bermondsey school to encourage students to shoot for the stars 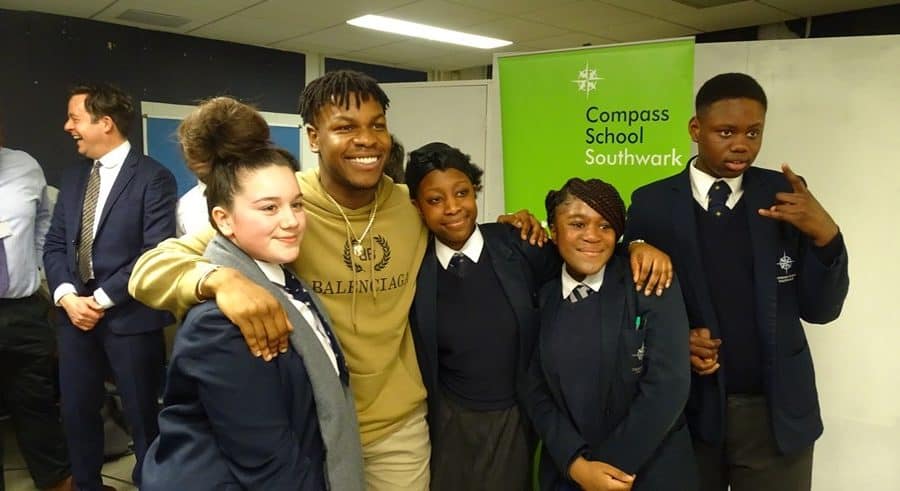 Star Ward actor John Boyega with Compass school pupils earlier this year. He says he wants to do more to support young people in Southwark.

Star Wars actor John Boyega made a surprise visit to a Bermondsey secondary school last week to give drama pupils advice on how to break into the competitive industry.

The unannounced celeb visit saw Boyega give a speech to Year Ten and Eleven students at Compass School on Drummond Road to give them tips on becoming involved in the film industry.

“They were absolutely delighted,” said Benjamin May, a drama teacher at the school who organised the visit.

“I thought it’d be great for our young people. John’s a local boy from Peckham and a lot of our children have grown up in a similar area so they are familiar with his journey.”

During his speech, Boyega urged pupils to take full advantage of their time in school, saying it only happens once.

“One of the things he was saying is that you’ve got one chance, so make the most of it,” said Mr May, who is leader of creative arts at the school.

“He also said a film employs a village of people, which was good for them to hear, because it gives them focus about what they want to do.” The school is planning on continuing to work with the celeb and his representatives to encourage their students to get into the arts.

A possible event in September or October for pupils to learn more about the creative arts and how to break into the competitive fields is also being planned, said Mr May.

Southwark NewsNewsMay the force be with you! John Boyega visits Bermondsey school to encourage students to shoot for the stars