Get in touch with the News if it was you! 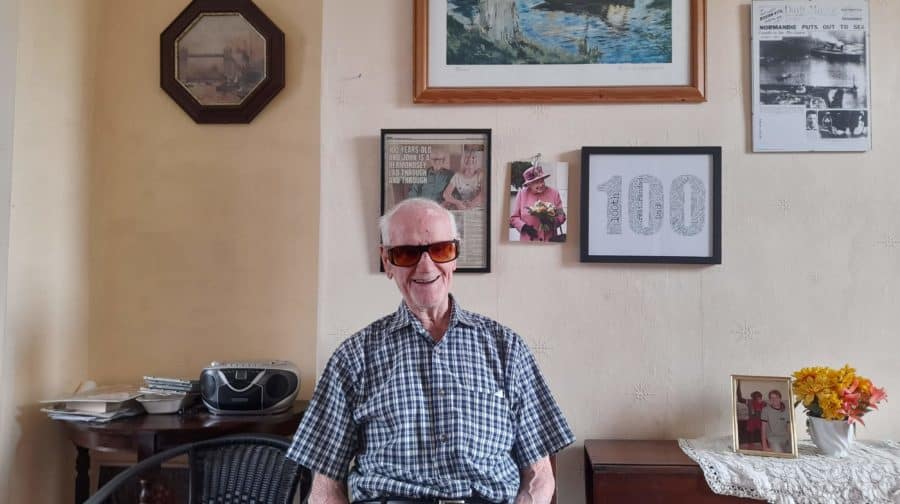 John in front of his Southwark News interview last year

A 100-year-old Bermondsey man wants to buy a pint for the “absolute diamond” who stayed with him for an hour after he fell and suffered injuries that could have been catastrophic.

John Cooper, whom we interviewed shortly after he reached his century last year, was walking home along Southwark Park Road in November. He tripped on an uneven paving stone and fell over.

John broke three ribs and had a punctured lung, as well as a slight fracture to his pelvis. The skin had to be glued back onto his head where he fell over and he also tore the skin off his knuckles. He was still conscious.

“I could see my house across the road,” John said. “I was thinking ‘if I can get there, I can be okay’. But this bloke came along and told me to stay there. He said ‘you’ll be alright for a while’.

“If I’d gone home, what would have happened there I don’t know. I didn’t realise the situation I was in.”

Three young women also came and helped clean the blood off John with some tissues they got from a nearby shop. An ambulance was soon called.

“When the girls went, the bloke stayed. He must have been there for about an hour. He was an absolute diamond. When the ambulance got there, they tried to walk me but with this pelvis thing, every time I put my leg down it bent, so they ended up carrying me.”

John wanted to stay in touch so he could thank his good Samaritan properly. The paramedic gave the man a piece of paper to write down his phone number, but it got lost at some point in the journey to the hospital, so John has no way of getting in touch to thank him.

“I want to find him to say thank you but I don’t know what to get him,” John added. “If he has a girlfriend I could get her chocolates but she didn’t save me – he did.”

John usually goes to his local pub the Ancient Foresters on Southwark Park road three times a week “to get out the house, for a change of scene”. He said that he thought a good way to thank his helper would be to buy him a pint.

After his fall John was rushed to St Thomas’ hospital, where he stayed for about two weeks. When doctors discovered the punctured lung, they told him there were two options: leave it to heal itself, which was unlikely, or drill through to drain the fluid that had got in there.
“I said ‘well it’s up to you’. A couple of hours later they came back, about four or five nurses came around and they were all watching. I thought ‘I’ve pulled!’” The operation was a success.

John said he was not worried about getting Covid-19 in his hospital stay, even though this was before vaccinations. “Funnily enough it never even crossed my mind,” he added. He has since been vaccinated. 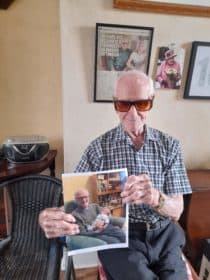 John with his great-grandson Lenny

After getting out, he spent three weeks recuperating at his daughter Pat’s house, before moving back to his Southwark Park Road home, where he has lived since the war. Pat often comes to visit, with John joking that she acts as his “translator” on the occasions when he doesn’t hear something. He said that he had recovered well from his injuries and is not in pain.

This summer John has been watching the Euros, although he hasn’t been too impressed with the general style of play in the modern game. “It’s just pass, pass, pass. No one tries to shoot any more.”

John was a keen football player in his youth, turning out for the RAF when he served in the Middle East in the Second World War. One of his teammates was Harry Johnston, who later captained Blackpool in the famous ‘Matthews final’ in 1953. “He was good to play with – not up to my standard of course,” John joked.

Away from the Euros, John has kept busy by reading and playing codeword games. He proudly recites quotations from Shakespeare and Walter Scott.

John turns 101 at the end of June. Extended Covid-19 restrictions mean like last year there will be no big celebrations but he said he didn’t want a party anyway. “I just want to forget about it!,” he said.

A picture of him cradling his great-grandson Lenny, born earlier this year, sits on his shelf. “100 years between us. It’s amazing isn’t it.”

If you are the Good Samaritan email kit@southwarknews.co.uk and we’ll reunite you with John.