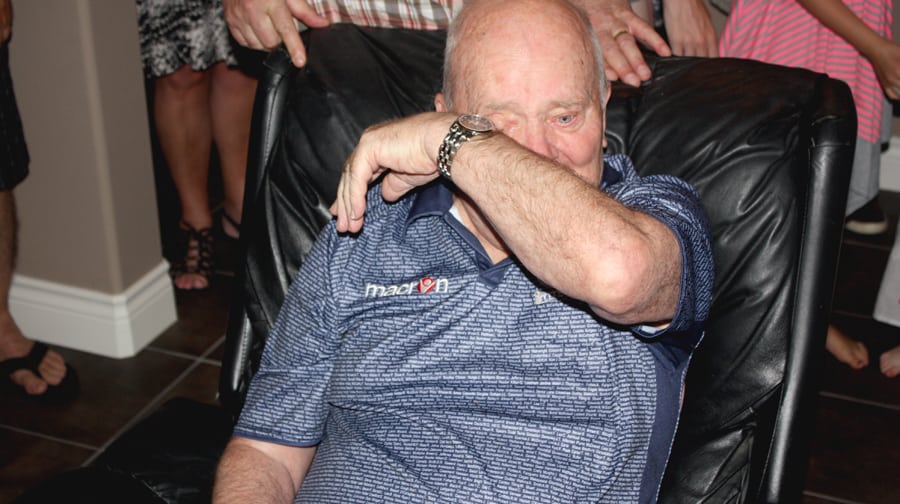 John, pictured two years ago after receiving a personal message from then Millwall manager

A man dubbed Canada’s biggest Millwall fan who passed away last year has been brought back to his beloved Den, after his family buried his ashes there.

John Duggan, 84, never stopped supporting the Lions, despite moving thousands of miles away to Canada to work in the prison service in the 1970s.

The super-fan even received a personal video message from former manager Neil Harris for his birthday and sixtieth wedding anniversary in July 2017 at his home in British Columbia.

Now, after John sadly passed away last year, his British-based family have buried his ashes in Millwall’s garden of remembrance in a final fitting tribute to their loved one.

The idea was suggested by his older sister, Joan Armstrong, who lives in Forest Hill.

“I thought to myself, he would love to have some his ashes at the club,” said the 91-year-old. “I found out they had a garden of remembrance which I didn’t know about.” A plaque installed at Millwall to John

Joan contacted the club to arrange a burial of the ashes, before flying to collect them from John’s wife Anne in Canada.

Avid antique collectors, John and Anne had assembled a large collection of teapots over the years – and at his family home, his ashes were kept in a large pink teapot.

The Duggan and Armstrongs were scratching their heads for a way to transport John’s ashes to the UK until they came across a wooden box which used to hold tea in it.

“All quite British!” laughed Joan.

Helping Joan last month was her son, Christopher and his wife Sylvia.

“I was upset at first, but he would’ve loved to known that his ashes were at Millwall’s ground,” she told the News.

“Millwall has been wonderful, everybody was so kind.” Alongside the burial, a plaque has been erected in John’s memory at the Den, with a poem written by Joan.

The 84-year-old had been a lifelong Lions fan after being introduced to the club by his father at an early age, who was born in Bermondsey’s Tooley Street in 1901.

Speaking to the News two years ago, he reminisced about seeing his first ever game aged just six at the Old Den – which was so packed that children were being passed over to the front. John with his wife Anne at their home in Canada

And he spoke of having watched his team play against the Canadian national team in Vancouver in 2004, wearing a t-shirt emblazoned: “Canada’s biggest Millwall fan.”

Outside of following the Lions’ every move, John enjoyed going on cruises with his wife of more than sixty years, Anne.

“He became fanatical about Millwall,” said his sister. “He just followed them the whole time. Everyone knew he was a fan.”

John is survived by two sons and two daughters, alongside multiple grandchildren.

Excellent story. Thank you very much for this story. His dad, my grandad was also a Millwall fan as is my brother and I. Thank you again.

Thanks for doing this for my dad. My brother Alec and still carry the torch on behalf of my father and his before him ?

It was lovely to see this article. It is so thoughtful of you to have done this. John would have loved it.