Joshua Boadu: ‘Alleged killers filmed in a celebratory mood at recording studio hours after stabbing him to death in Bermondsey,’ court told 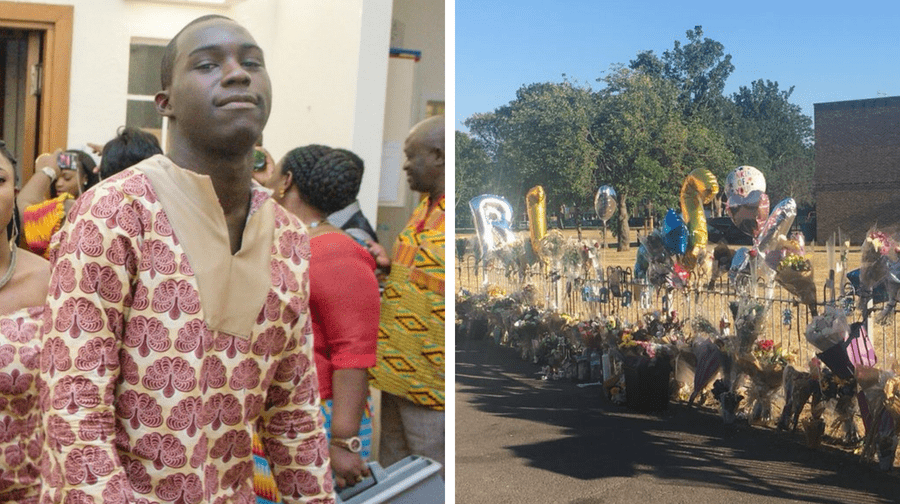 The alleged killers of Joshua Boadu were filmed ‘in a celebratory mood’ at a recording studio hours after stabbing him to death in Bermondsey, the Old Bailey heard today.

Denilson Davis, 21, Matthew Adebiyi, 19, and a 16-year-old who cannot be named, allegedly knifed 23-year-old Joshua – affectionately known as ‘SJ’ – and sped away from the scene.

The court was told they were seen chasing the victim’s bronze VW Golf in a blue Peugeot driven by Davis at 5.55pm on 11 June last year, before pulling over and forcing him into a blind spot nearby.

Jacob Hallam, QC, prosecuting, said a witness described ‘SJ’ “being pushed up against a nearby parked car, surrounded by the three black males – one in front of him one either side.”

“The witness saw one of the males holding a knife, raising it Joshua and striking him from above.

“Joshua tried to stop the knife blows with the only thing, he had available to him – which was his body. “Joshua was a big, healthy and young man.

“Although he was able to escape from the scene of his attack and find safety and shelter in a nearby property, the terrible wounds that he sustained in the attack were simply too much for him to bear and despite the intervention of the emergency services on the day and continued medical treatment provided for him at King’s College Hospital, he was declared brainstem dead on the 18 June last year.

Jacob Hallam, QC, continued: “Joshua was murdered by three men, who had arrived at the scene where he was eventually to lose his life, in a blue Peugeot 3008, a sort of hefty 4×4 motor vehicle.

“Two of those men are Denilson Davis, who was the driver of the vehicle and the youth who was one of the passengers in it – likely the front passenger.

“The third man was Matthew Adebiyi. He has run away to Nigeria to escape, for a time at least, being held to account for his actions on that day. No doubt his time will come.

“Videos were found on Adebiyi’s mobile telephone which were recorded between 11.30 and midnight, capturing him and the youth together at a recording studio in the Peckham Rye area. “Somebody was filming them, they were in a celebratory mood,” he said.

Mr Boadu, who had dreams of becoming an engineer, had sought refuge in a nearby house on Lucey Way from where he was taken to King’s College Hospital by emergency services.

But after ten days on life support he was pronounced dead.

He had been stabbed to his chest, upper left shoulder and right arm and hand.

Davis was arrested at his home on Innes Street, Peckham on November 27.

He originally denied any involvement but later admitted he was at the scene.

The 16-year-old was arrested on February 13 this year and also refused to answer police questions.

Davis, of Montgomery Avenue, Hemel Hempstead, Herts, and the 16-year-old, both deny murder.

Southwark NewsNewsJoshua Boadu: ‘Alleged killers filmed in a celebratory mood at recording studio hours after stabbing him to death in Bermondsey,’ court told