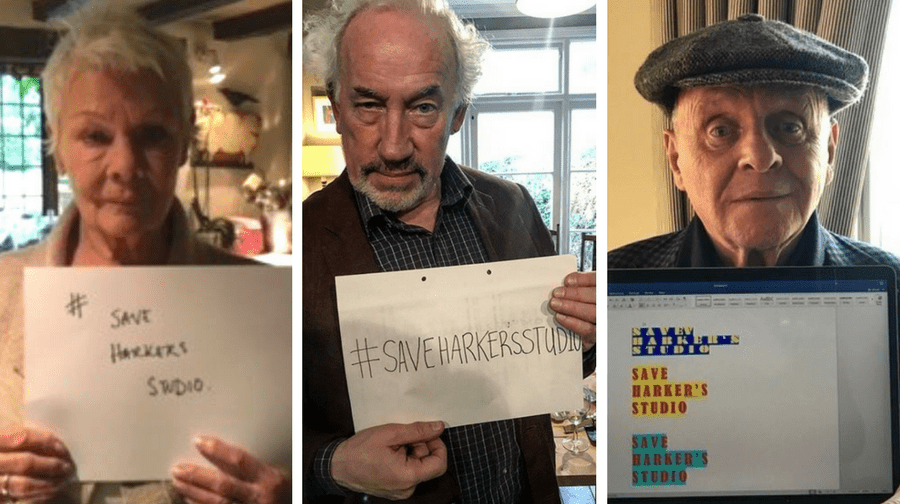 Famous faces from the big screen and the West End stages have lent their support to a campaign to save Walworth studios of lauded scene-painter Joseph Harker.

Judi Dench, Anthony Hopkins and Simon Callow have shown their support by taking selfies with the “Save Harker Studio” message.

The campaign hopes to stop the studio in Queen’s Row from being turned into six luxury flats by Greencastle Worldwide Ltd. Their plans were given permission by Southwark Council earlier this year.

An online petition calling for the grade-II listed Edwardian building – built by Harker in 1904 as a theatrical scene-painting workshop – to be saved, has gathered 2,800 signatures.

The old Harker Studio building in Queen’s Row, soon to be left vacant by Flints

Louise Calf, one of the three actors leading the campaign, told the News: “We’ve felt a step behind in this campaign, we’re not used to working on buildings, so we thought we needed to be a bit creative in getting the word out.”

Louise and her colleagues took to social media platforms Instagram and Twitter, and started asking a few famous friends to post the photos with the campaign’s message.

The 33-year-old said: “We approached Judi [Dench], because she is friends with Joseph Harker’s great granddaughter, and Anthony Hopkins is also a friend of the family.

“And we’ve had support from Arwel Wyn Jones, a product designer for the BBC who worked on Sherlock and Dr Who.

“What’s really exciting is that we want to protect it so that it can carry on being a creative space for the future.”

The painting studio retains its theatrical association as home to Flints Theatrical Chandlers and provides work space for London artists.

Justine Simmonds, deputy London mayor for culture said: “We have spoken to Southwark Council but as planning permission was already granted at the end of last year, there is no real opportunity to save this space.”