Stefano Brizzi, 50, who worked as a web developer for Morgan Stanley, killed PC Gordon Semple, 59, after setting up a drug-fuelled S&M session on the gay dating app Grindr 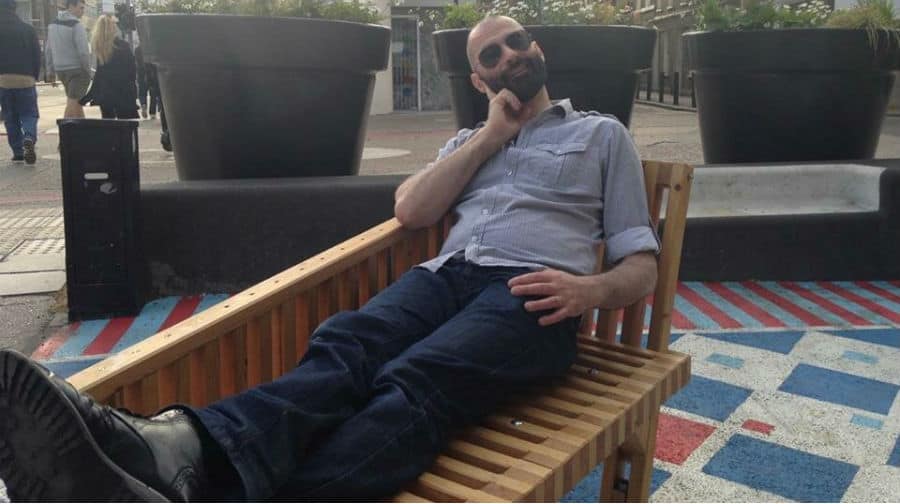 The jury trying a Breaking Bad-obsessed City worker from Borough accused of strangling and dismembering a police officer is considering its verdict.

Stefano Brizzi, 50, who worked as a web developer for Morgan Stanley, killed PC Gordon Semple, 59, after setting up a drug-fuelled S&M session on the gay dating app Grindr.

Brizzi, who lived on the Peabody Estate in Southwark Street, admits he was inspired by his favourite TV show Breaking Bad when he tried to dissolve the officer’s body in an acid bath.

The officer, who was on duty when he arranged to meet his killer, was reported missing by his partner on April 2, sparking a massive manhunt.

CCTV image released by Met Police of PC Semple when he was seen in Great Guildford Street, before his disappearance on April 4

Police were alerted to a “smell of death” on 7 April coming from his flat, where they found Brizzi dressed only in Y-fronts and sunglasses.

The Italian admitted killing PC Semple to police, telling them Satan had instructed him to “kill, kill, kill”.

He now says he either accidentally strangled the cop while choking him with a dog lead or that PC Semple suffered a heart attack.

His defence barrister Sallie Bennett-Jenkins QC last week insisted Brizzi “was not a monster” and a “human being like you or I”.

She said: “A trial such as this cannot give and does not give anyone any pleasure.

“There’s been a tragic loss of a man’s life. You are asked to determine the circumstances of his death.

“You have heard it said that Gordon Semple was a good man and no doubt he was.

“You will have to confront the fact that his respectability and his kindness to others did in fact mask another side of Mr Semple’s life which did bear the hall marks of promiscuity, sexual fetish in collaboration with the taking of illegal drugs.

“I’m afraid that’s the plain truth, I hope you will not criticise me for saying so for I’m afraid you have to deal with the real facts – the bald and unvarnished truth.”

She continued: “Mr Brizzi had for many years was employed as a highly skilled professional, a man working and valued in an investment bank.

“In April of this year he had done nothing to bring himself to the attention of the police in his life – now here he is regarding the circumstances of the death of Gordon Semple.

“He too inhabited that world, a world of homosexuality, of promiscuity, of sexual fetish and drug taking. That is again the bald truth.

“Stefano Brizzi would be the first to accept his action between the time of PC Semple’s death and his arrest on 7 April were horrific.

“You may think that whatever these actions were he has not attempted to run away from them.

“Whatever those actions were, they were carried out in a pall of his own making by virtue of the drugs he had taken.

“He’s a human being like you or I, and your good sense of fairness and your adherence to the oaths of affirmation that you’ve taken insist that you do not treat him as a monster.

“I’m afraid people’s sexuality is their own business,” she said.

Ms Bennett-Jenkins also warned jurors against being prejudiced by their own religious convictions if they had any.

Brizzi claimed the days after the killing passed in a drugged up haze fuelled by crystal meth and sleeping pills.

Two black bin liners were found to contain mounds of flesh, a human pelvis, a hand and part of a spine.

Some of the officer’s remains were found dissolving in a bath of acid, other body parts were found in Brizzi’s bin, and in the communal bins of the Peabody Estate.

Traces of PC Semple’s DNA were found in the oven, on the chopping board and on a pair of chopsticks, indicating he may have eaten some of the victim as well.

One of PC Semple’s severed feet was found by a member of the public in Bermondsey.

Brizzi and PC Semple had been trying to persuade other gay men in the area to join them for a “Chemsex” party, jurors heard. Only one man agreed to join them, but was sent away by Brizzi via intercom who told him: “We’re having a situation here. Someone fell ill but we’re taking care of it. So our party is cancelled.”

He’s believed to have arrived at the very moment Brizzi was strangling PC Semple.

After the killing, he Brizzi sent a message to the victim saying “next time just one on one” to make it seem like he had left the flat alive and well.

PC Semple, from Greenhithe, Dartford, was reported missing by Gary Meeks on Saturday April 2 after he failed to come home from work.

Brizzi denies murder and the jury of nine men and three women have been told they can consider an alternative count of manslaughter.

He admits obstructing the coroner in his duty by dismembering PC Semple’s body in order to dispose of it.