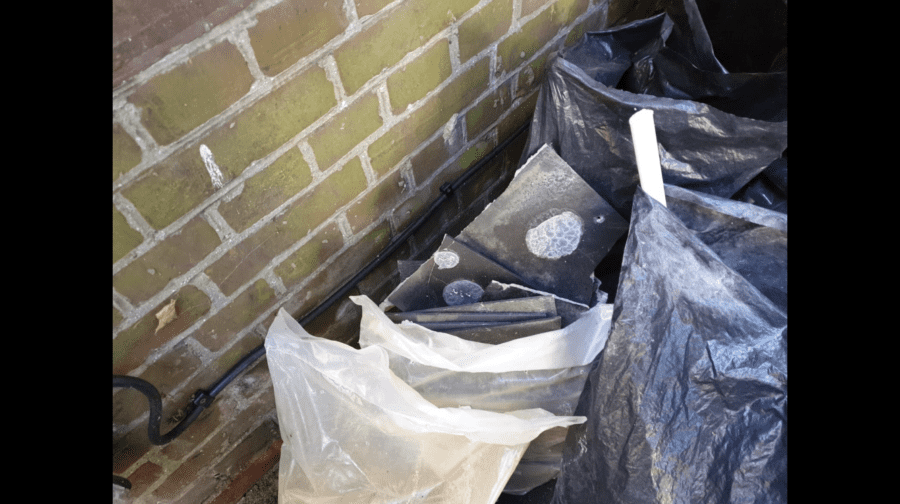 A bag of broken roof tiles that needed replacing

Stray cricket balls from Burgess Park Community Pitches are a “risk to life” say Cobourg Road residents, who have seen dozens fly over a low fence into their homes and gardens.

Andrew Bilby, from Cobourg Road, said his complaints have been “fobbed off” by Southwark Council for over a year.

Last summer he was told that planning permission was needed to raise the height of the fence backing onto the playing fields from 3.6 metres to 6.4m and would be submitted.

But a balls-up meant the planning application was shelved, and now he’s been told there wasn’t enough cash left for the work to take place until 2020.

Since then, he alone has counted around twenty hard balls that careered into communal gardens where children are often playing, or smashed into the roof.

One night alone in August last year saw five flying over the fence. But after approaching the teams playing, one umpire allegedly told him the safest thing to do was to “keep the kids inside”. Andrew’s landlord has had to replace seventeen smashed tiles – and says he has sent the bill to the council to reimburse.

“It’s beyond annoying now, since the last cricket season and before, let alone this season,” Andrew told the News.

“But forgetting damage to property already caused, we have seven-plus children from flats within the block who actively use and play in the garden.

“Some families are not allowing their children to use the garden that is theirs to use.

“Recently a ball hit a flat window which is the height of a child’s head.

“I fear life changing injuries… if somebody is hit. Damage to a roof

“I understand that this must be a frustrating situation for the residents of Cobourg Road.

“Last year, the council asked the English Cricket Board to visit the site to carry out a boundary assessment and they found that the current fence was a sensible and suitable solution to protect houses from stray balls.

“However, we have listened to residents and taken the decision to increase the height of the fence, further to mitigate the possibility of cricket balls causing damage to nearby properties.

“A planning application has been submitted and I hope that the new fence will be in place when the cricket season starts again next year.”

But the news the planning commission had been submitted and work was due to be completed next summer was of little comfort.