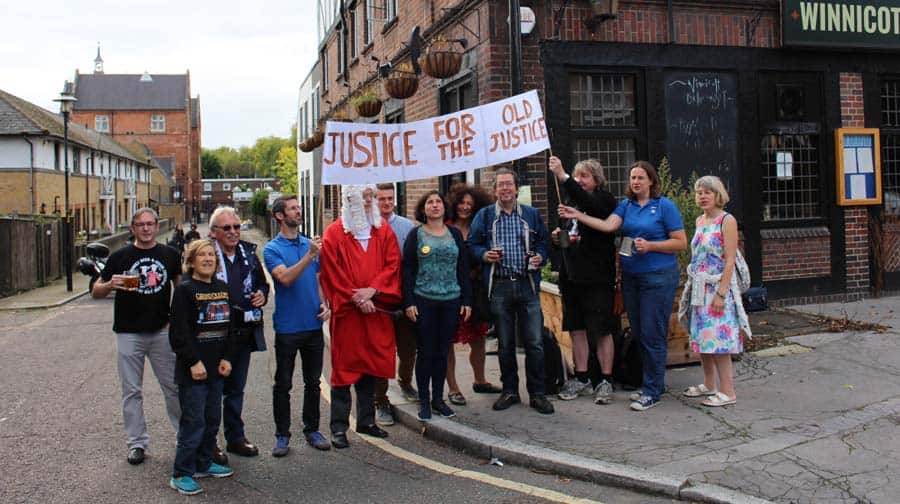 Campaigners held a mock trial outside a Bermondsey pub recently saved from being redeveloped into flats.

The Southeast London branch of the Campaign for Real Ale (CAMRA), along with residents and councillors, organised a mock trial, complete with someone dressed as a judge outside the vacant Winnicott in Bermondsey Wall East.

Earlier this year, Milan Babic Architects put forward a planning application on behalf of Hamna Wakaf Ltd. to convert the building into residential use, but it was rejected.

Since then, CAMRA, councillors and residents have launched a campaign to get the pub – formerly known as the Old Justice – listed as an asset of community value.

SE London CAMRA chair Steve Silcock, who helped organise the event on Saturday, said: “The ‘trial’ heard evidence from, among others, CAMRA’s pub protection officer Neil Pettigrew who highlighted the historic character of the building and its numerous original 1930s interior features.

“Councillor Anood Al-Samerai stressed that in the right hands the building could become a successful community pub.

“Her fellow councillor, Hamish McCallum, added that a 200 signature petition had so far been gathered against the redevelopment indicating the very strong local support for retaining a pub in this location.”

Riverside ward councillor Hamish McCallum added: “We are very grateful to CAMRA in helping us to keep up the pressure to make sure the pub is listed as a community asset and brought back into use as a well-managed local community space.

“Special thanks to ‘Judge Julian’ who made such an impassioned judgement about the need for this pub and for allowing local councillors to give our ‘witness statements’ about its importance in our community.”

A spokesperson for Milan Babic Architects said the pub owner did not wish to comment.