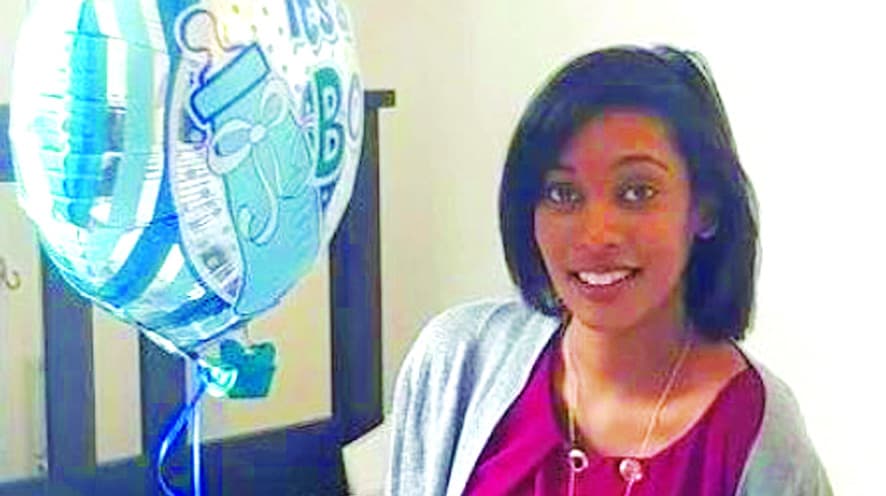 A Peckham man has been convicted of the murder of Kelly-Mary Fauvrelle and the manslaughter of her baby son.

Ms Fauvrelle was eight months pregnant when she was stabbed 21 times by Aaron McKenzie in June last year in Thornton Heath.

Baby Riley, who was delivered at the scene of the murder, tragically died just days later.

McKenzie, of Peckham Park Road, was convicted at the Old Bailey today for murder, manslaughter, and possession of an offensive weapon.

The 26-year-old will be sentenced next Friday.

Jurors heard distressing details of how the mother-to-be was found dying in her bedroom by her sister Melissa, where a cot was set-up for Riley, after she heard screams. Relatives had been sleeping upstairs.

Family did not see the suspect enter or leave the property, and there was no sign of forced entry. McKenzie is guilty of murdering Kelly, and of the manslaughter of baby Riley

CCTV footage uncovered by police showed a man, thought to be the killer, in Thornton Heath’s Raymead Avenue both before and after the horrifying attack.

This showed him walking towards Kelly’s house at 3.15am on the day of the murder and running in the opposite direction around ten minutes later.

Following the murder on June 29, 2019, the court heard how McKenzie sickeningly played the victim, telling police he had nothing to do with the attack.

He went to the hospital where medics were fighting to save baby Riley’s life, and even joined Kelly’s family as they mourned.

The court heard that just five hours after the attack, McKenzie was having a driving lesson, acting “completely normal” according to his instructor.

Initially treated as a witness, McKenzie became a suspect and was arrested on July 11.

Police say he admitted to being responsible for the deaths, telling them: “No one else was involved in this. There was no reason for it other than my faults”. But despite his admission to cops, McKenzie pleaded not guilty to all charges, saying he was under pressure when he committed the offences.

He also gave police the name of another man he claimed was responsible for Kelly’s murder – for which police say no evidence supports.

The Met’s DCI Mick Norman said the horrific case had been heart-breaking for Kelly’s family and the officers who have grown close to them.

“The agonising loss of such a young woman and her child at a time when they were eagerly awaiting Riley’s birth and looking forward to a happy future is beyond imagining,” he said.

“Despite the evidence against him, McKenzie has subjected Kelly and Riley’s family to the trauma of a trial.

“The theft of Kelly and Riley’s happy futures is something that will haunt those who loved her forever and I sincerely hope that Aaron McKenzie is similarly affected as he faces his future incarcerated.”