Kevin Downey, 60, has ran nearly every marathon since 1986 - but this year's effort for little Harvey Brown will be his last, he says 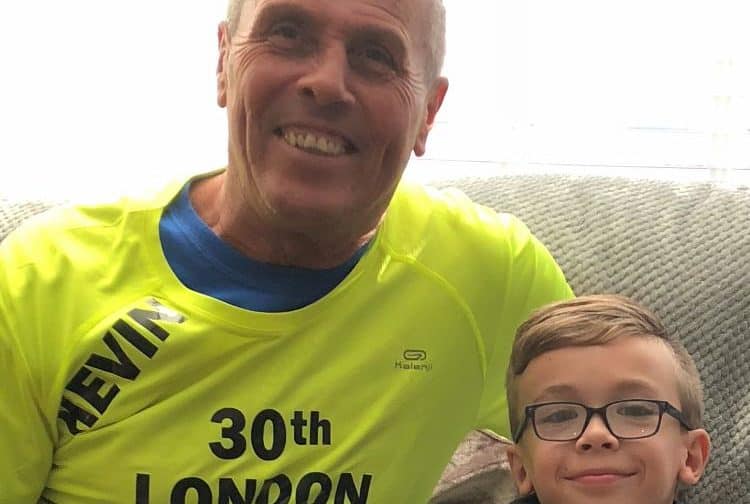 Kevin, left, will be running his thirtieth and final marathon in aid of 10-year-old Harvey, right

A Bermondsey man will be hanging up his trainers after running his thirtieth London marathon this year for little Harvey Brown.

Kevin Downey, 60, has run nearly every London Marathon since 1986 for good causes raising an estimated £140,000 for charity in the process.

This year, lifelong Millwall fan Kevin will run for the team’s mascot, Harvey, 10, who suffers from the ultra-rare Morquio syndrome.

It affects skeletal growth, leaving sufferers with weak bones, a tendency to develop heart disease, and worsened vision and hearing.

Money raised will go towards the MPS Society, a small charity which helps people with Morquio and other related syndromes.

But this year’s run will be Kevin’s swan song after three decades of running.

“I’ve been running the marathon for half my life,” he said. “It’s gotten harder, and I’m not getting any younger!” He met Harvey’s family through Millwall, and has known them for around 30 years, he says.

“He [Harvey] is a lovely Bermondsey kid, especially how bubbly he is. He hasn’t got a care in the world, it’s great,” said lifelong Millwall fan, Kevin.

“The MPS Society is such a small charity, so every penny helps really.”

Harvey’s doting dad, Dean, told the News said the family would be there to cheer Kevin onto the finish line.

“Not only raising much needed funding for the MPS Society, but also raising awareness is such a lovely gesture,” said Dean.

“We’ll be there cheering him on at the finish line, another emotional day I’m sure.”

Also as part of the fundraising activities will be an opportunity to win a Millwall shirt singed by the first team in a raffle at the club’s game versus Brentford on Friday.

Raffle tickets will be sold for £1 a strip on the Millwall bus for a chance to win the espana med. Kevin also told the News he wanted to thank everyone who had donated during his three-decade long series of marathons, first sparked by the birth of his daughter who was born premature.

“I’m hanging up my trainers, so I just wanted to thank everyone who supported me and sponsored me over the years,” he said.

When asked by the News how many people it had been, he said: “Thousands and thousands of people.

“London, thank you for the memories.”

Over £500 has been raised for the fundraiser so far.

You want to donate, you can do so here.