'If I can inspire just one other person to follow their dreams, even if the odds are stacked against them, that would be amazing' 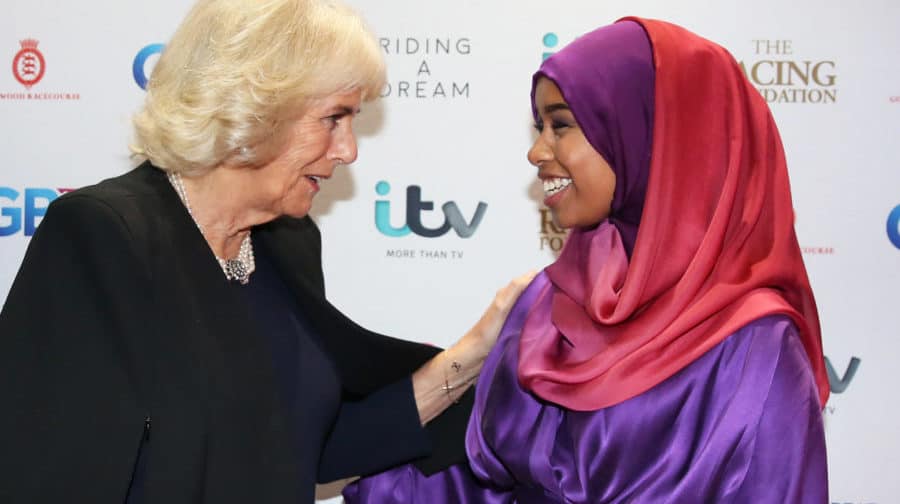 HRH The Duchess of Cambridge meets Khadijah Mellah at the documentary film premiere of Riding a Dream. (c) Lee Mills

A documentary film telling the incredible story of a teenager from Peckham, who became the first British woman muslim jockey, has broadcast on ITV.

Riding a Dream, broadcast this afternoon on ITV, followed Khadijah Mellah, from Peckham, a Sydenham High School student as she embarks on a seemingly impossible feat.

At the beginning she is a keen rider at Brixton’s Ebony Horse Club, but within just three months she has become a winning jockey – taking the Magnolia Cup in her first ever race while observing Ramadan and completing her A Levels.

The film follows Khadijah through the ups and downs of learning to ride a racehorse, with her plans to race this year almost derailed after failing an assessment just weeks before Glorious Goodwood.

But after proving the training team, who thought she needed at least six months of intensive training before attempting the race in 2020, Khadijah manages to up her game and successfully completes her first ever gallop seven days before the race.

Speaking before the big day, she says: “I would love to win but chances are I’m going to be 4th or 5th.”

Despite odds of 25 to one, Khadijah went on to take the cup on Haverland, a horse that had only ever won one race before.

Describing the emotion she felt, Khajidah says Ebony Horse Club had changed her life beyond recognition – and hopes it will help others follow her path: “My story has changed the perception, nationally, about Muslim women,” she said.

“Learning to ride, being given the opportunity to ride in a race, winning the race – and having a documentary made all about all of it has just been the most incredible experience from start to finish.

“If I can inspire just one other person to follow their dreams, even if the odds are stacked against them, that would be amazing.”

The documentary premiered at The Ritzy Picturehouse on Monday, October 28, with HRH The Duchess of Cornwall, who is president of Ebony Horse Club, in attendance.

Oli Bell, Riding a Dream producer and an ITV Racing presenter, said: “I hope that people watching Riding a Dream will see what Khadijah’s achieved and feel inspired.

“It’s a wonderful story because you see someone who never would have expected to ride in a race, let alone win a race and you can see her blossom.

“Hopefully it will show that whoever you are, whatever your background, you can achieve your dreams.

“There is no doubt that what Khadijah achieved was a significant moment, not just in racing but in the wider sporting world.

“I hope it will encourage more people to get involved in the sport and for racing itself to broaden its appeal.”