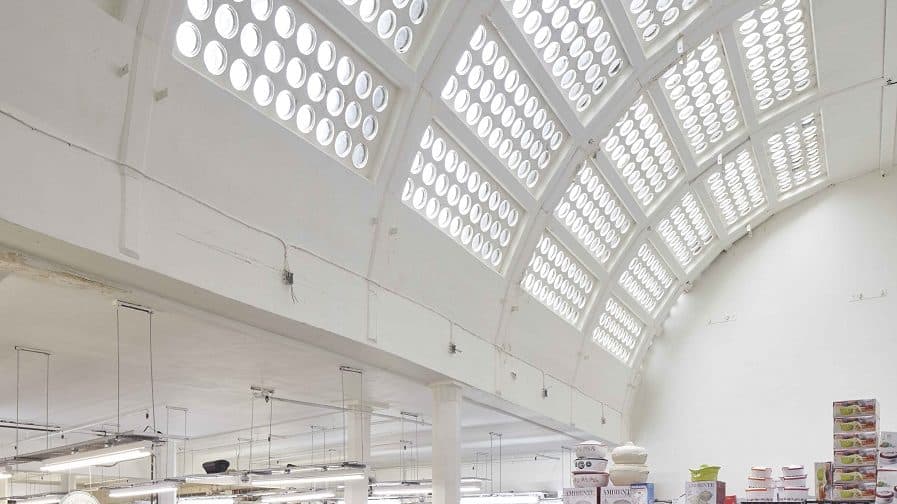 The owner of Peckham’s Khan’s Bargain store has been commended for his Rye Lane restoration project uncovering a hidden Art Deco roof fit for a palace. It took two local handymen, known as Tony and Pops, a year to complete the work with help from Akbar’s family and Peckham-based architect Benny O’Looney.

The building was originally designed by modernist architects TP Bennett and Sons in 1935 as an extension to what was then Holdron’s Department Store, a landmark in Peckham’s ‘Art Deco quarter’.

The distinctive roof was originally supplied by Lenscrete, and is made from precast concrete with a glass lenses.

Akbar first came to the UK from Afghanistan in 1999, where family had a retail business in Kabul.

After arriving in London with little spoken English and few qualifications, he started off trading on a Rye Lane market stall before opening Khan’s bargains a year later.

The store is now one of the largest in Rye Lane, and Akbar plays a prominent role in Peckham’s business and heritage communities.

Akbar is both a member of both Peckham Vision, a community group dedicated to helping build a sustainable and thriving Peckham town centre, and the Rye Lane Traders’ Association.

He is now on a mission to help get more traders involved in preserving Peckham’s architectural heritage.

“I would encourage other shopkeepers to visit my shop and see that behind more recent coverings, there is often beautiful historic features to be discovered and restored,” he said.

“I hope the other traders on Rye Lane might try to make their own discoveries at their shops.

“My shop is now a much brighter and beautiful place to visit. This restoration work has helped my business and has been exciting to do.” The ceiling before restoration

A certificate from Historic England states that awarded projects must made ‘an important contribution to local and national history’.

Akbar will formally receive his award on Friday, March 29 at a celebration held at 135 Rye Lane.

Afterward, Akbar and Benny’s next projects are to clean and help save the shop’s original glazed terracotta frontage, and see if the original signage can also be restored.