Katie Martin, a mother of a 20-month -old boy, has been living there since April and says she has to “wipe him down” to clean him. 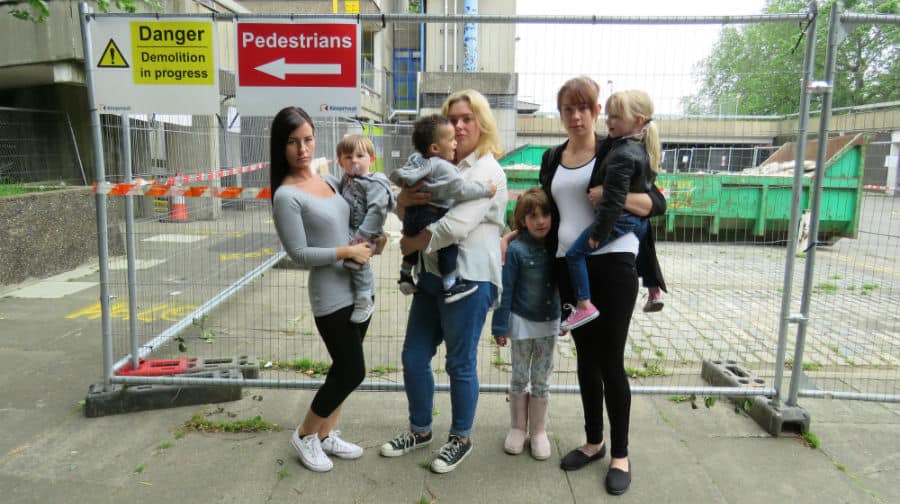 Young Bermondsey mums living in Maydew House for temporary accommodation claim they have not been able to wash their children properly as they live on a “building site”.

Their criticisms come as Maydew House, part of the Abbeyfield Estate, is undergoing a major refurbishment project meaning construction is taking place on all but three floors.

They claim the conditions are so dire they fear for their children’s health as asbestos is removed around them.

Katie Martin, a mother of a 20-month -old boy, has been living there since April and says she has to “wipe him down” to clean him as the taps and hot water don’t work.

She said: “I’ve been without water and haven’t been able to shower since moving in. The locks have been tampered with too. I don’t feel safe living here.

“I think it’s disgusting that they [Southwark Council] can put people here, especially with children. They just don’t seem to care.”

Katie did complain about the conditions and was offered permanent housing above a restaurant but she says the smell from the kitchen below was too overpowering.

Danielle Collinson, a mother of two, has been living there since July last year and has also complained but has not received any alternative.

She said: “I have complained but they have not even offered me a better place at all. My youngest had to have a heart operation when she was born but they haven’t taken that into consideration.

“They [Southwark Council] want to rush us out because they want to get down to our level but they can’t move us out till we have suitable housing.”

Maydew House was the centre of controversy in 2010 as plans to sell off the building for development were considered after Southwark Council received a large bill for removing asbestos.

Residents were relocated last year but three floors have been maintained for temporary housing.

Councillor Stephanie Cryan, Southwark Council’s Cabinet Member for Housing, said: “The council is finalising plans to refurbish Maydew House which will allow us to bring high quality homes back into use for our residents.

“While the planning and preparation is underway, we are using the block to provide temporary accommodation to people in desperate need of housing.

“With such huge demand for housing and a lack of available properties across London, we have to make use of all available housing, including blocks where improvements are required.

“We’re very sorry for the problems that some Maydew residents have experienced with erratic water supply.

“However, we have been fixing these issues as soon as they’re reported, and we are working with residents to find more permanent and suitable homes for them.”