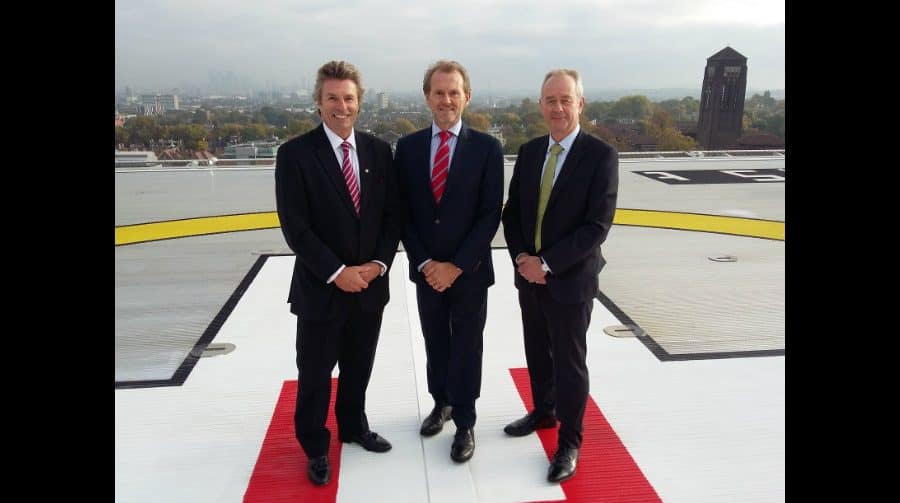 On the eleventh storey of the hospital’s Ruskin Wing in Denmark Hill, the pad will serve an area of four million people in Kent, Surrey and Sussex.

Medics will now be able to treat major trauma patients with life-threatening head injuries 25 minutes faster and more reliably than by ambulance.

Robert Bentley, clinical director of the King’s Trauma Centre , and south east London Major Trauma Network, said: “This is a huge achievement for all the staff, and as you know the NHS is hard pressed at the moment.

“Up until now helicopters had to land in Ruskin Park, which took a total of 25 minutes to transfer the patients.

“For our most critical patients that is critical time. They have to go over speed bumps and other potential complications. But now we can transfer them in five minutes.”

Funding for the helipad came from the County Air Ambulance Help Appeal, led by chief executive Robert Bertram, which donated £2.75m. Patients, families and medics donated over £500,000 through fundraising.

The helipad is also the UK’s first to be equipped with a ‘deck integrated firefighting system’. Dozens of jets of foam can be automatically sprayed in the event of a helipad fire, and will save King’s College Hospital NHS Foundation Trust £300,000 per year.

Dr Malcolm Tunnicliff, clinical director of Emergency Medicine at King’s, said: “We treat some of the most seriously ill and critically injured patients in the south east.

“The helipad will speed up the time it takes to transfer patients from helicopter to hospital, giving them the best chance of survival.”