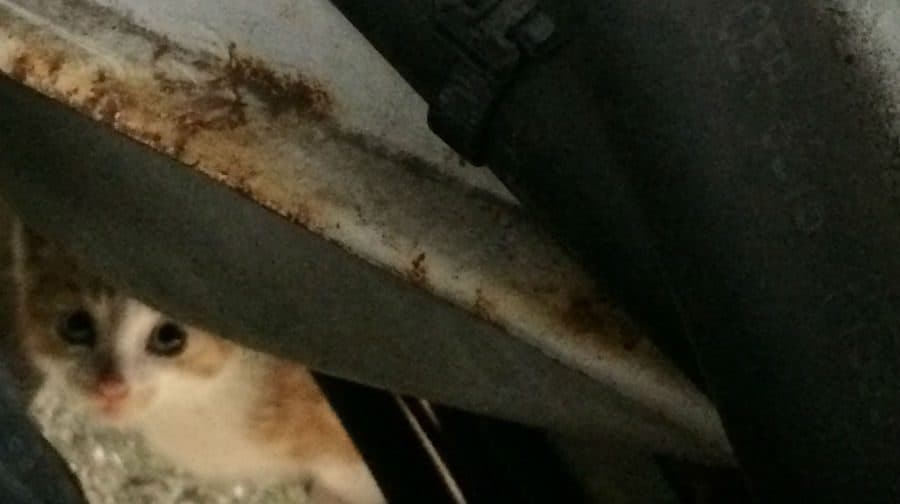 Five kittens and their mother have been rescued after they were found living in the engine of an abandoned van on the Ayelsbury Estate, writes Emma Finamore…

Rescue workers from the Celia Hammond Animal Trust were called out to the estate last week when residents spotted kittens climbing inside the engine.

Concerned for the safety of the kittens if the van was driven away, staff immediately attended the scene. “They were living between an old discarded mattress in a disused bin cupboard, and the engine of an old van parked next to it,” said Naomi Sheen, Homing Coordinator at Celia Hammond’s Lewisham branch.

“The mother cat – now named Ella – was very protective of her kittens and didn’t want anyone coming too close, and tried to warn our staff to keep away. It took almost four hours but the family were safely captured and brought back to the rescue centre.”

Ella had been catching pigeons to feed her seven-month-old brood, said Naomi, and despite their beginnings they were in fairly good health. “They were all very pleased to tuck into a bowl of cat food though!” said Naomi.

“Kitten season has begun and it’s been all hands on deck with emergency rescues. At this time of year we are constantly responding to calls about stray cats and litters of kittens being discovered in gardens, disused buildings, old cars, and behind shops,” said Naomi.

Female kittens can become pregnant from just four months old so the Celia Hammond Trust works to promote neutering, as well as rescuing and rehoming pets

Ella and her family will soon need new homes in pairs, after being neutered and microchipped. “The kittens are nowhere near as shy as they were when they were first caught,” said Naomi. “They are responding well to gentle handling and enjoying regular meals.”

Any offers of homes for Ella and her kittens, or for any cats in the care of the Celia Hammond Animal Trust or for help with neutering please phone 020 8691 2100 or email lewisham@celiahammond.org