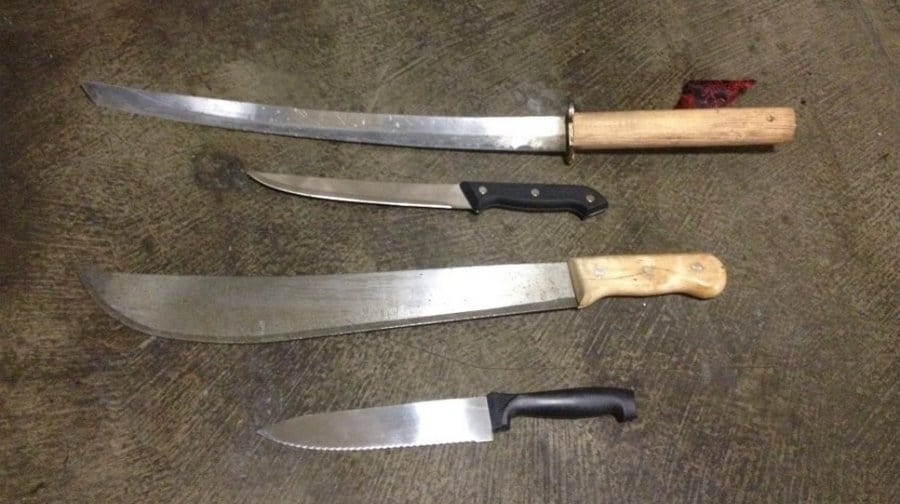 A sword, machete and two kitchen knives, which were found in Walworth last month

Tackling knife crime is the borough’s “number one priority”, Southwark police commander Zander Gibson told the News this week, after a sword, a machete and five knives were recovered following a dramatic pursuit through Walworth.

He called on the community to come together to wipe out the “incredibly disruptive crime” in the wake of a string of knife-related incidents in the borough.

The latest incident occurred on March 27 at around 6.20pm, when a member of the public spotted six youths carrying knives and chasing another person in Bagshot Street.

Several police units were sent to the scene after the witness reported that one man “had a metre-long sword on his back that he pulled out.”

Officers quickly found suspects matching the description, who then split up and ran. One suspect was detained at Bagshot Street, while five others were detained after running into Burgess Park.

A search of a nearby stairwell revealed a sword, a machete and four kitchen knives, along with blue plastic gloves. Another knife was found in the walkway at Ravenstone flats in Bagshot Street. The six youths, all males aged between sixteen and 25, were taken to a south London police station and bailed pending further enquiries.

Chief Superintendent Gibson told the News: “Knife crime remains the number one priority for Southwark police. ‘Stop and Search’ done in a targeted and respectful way is a perfectly valid tactic and my officers have my full support in using it to disrupt this incredibly destructive crime.

Two other knives which were taken following the pursuit

“I am delighted that ‘Stop and Search’ was used effectively on this occasion – there is a good chance it saved someone’s life.”

He said that the police were also fighting knife crime through its Anti-Knife Crime Forum and by working with the people of Southwark.

He added: “It is vital that we obtain and keep the support of the community in Southwark and that our community comes together to tackle knife crime as one.”

Inspector Kelvin Jackson-Robbins added: “Firstly I’d like to express my gratitude to the caller. I don’t think it’s an exaggeration to say that this call may have saved lives. The weapons recovered are all capable of causing serious injury and death and have no place at all being out in public. I am proud of my colleagues who had no hesitation in chasing these suspects.”

Police are appealing to witnesses. Please call Southwark CID on 101 and quote CAD 5594/27 March if you have any information. You can also report knife crime anonymously by calling Crimestoppers on 0800 555 111.

A final knife which was found by police officers