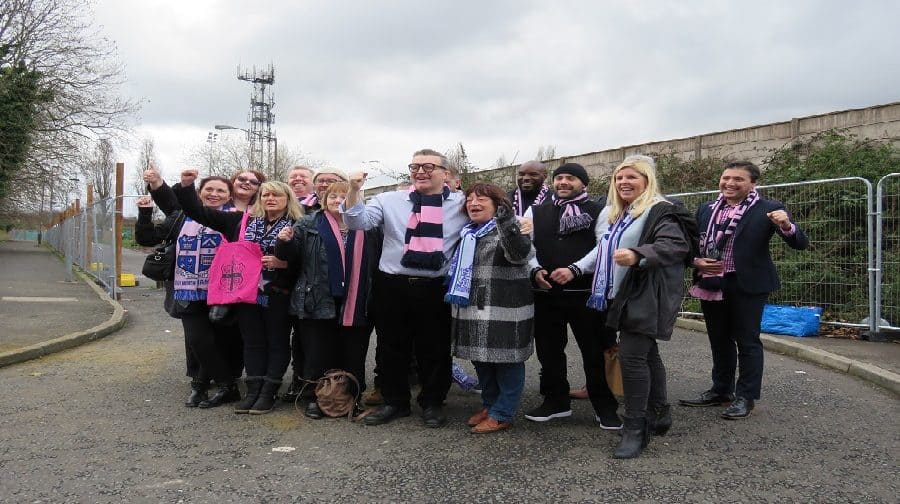 As reported by the News last week, developer Meadow has served the club with an eviction notice and a bill for £121,000 in rent.

The MP visited the non-league club’s Champion Hill home today in his capacity as shadow secretary of state for sport.

After speaking with club director Tom Cullen and team manager Gavin Rose, he recorded a video message encouraging Labour voters to join this Saturday’s rally in support of the 125-year-old club.

Mr Watson MP told the News: “As a child I grew up on non-league football and I know how passionate people are about clubs like this.

“I will do everything I can – if the developers think they can win this campaign, they have another thing coming.” Hamlet supporters are demonstrating at East Dulwich’s Goose Green on Saturday, protesting the eviction notice and backdated rent bill of £121,000, handed to the club by Meadow Residential on March 5.

The club says it has lost access to the ground, and has been told it cannot use its own name as it has been trademarked.

Meadow said that, during the term of licensed usage, it ‘has received no rent (despite being due under the licence) and have subsidised the day to day operations of DHFC Ltd’.

It also insisted it had offered the use of the ground until the end of the season.

Tom Watson’s visit comes ahead of tomorrow’s parliamentary debate over the club’s future.

Southwark Council wants to purchase the club’s grounds, and if Meadow refuse a market-price offer, councillors may forcibly acquire the site with a compulsory purchase order.

In the meantime, the team has said it will share a pitch with Tooting and Mitcham United’s ground, possibly up to the end of the season.

Manager Gavin Rose said: “The team are being as positive as they can be when there is uncertainty about the long-term future of the club.

“We have come together as a community and made our voice heard, not in an aggressive way but in a positive way.

“Everyone is trying their best to get the message out there and we have had excellent support from Southwark Council, and [Council Leader] Peter John in particular.”

Save Dulwich Hamlet spokesperson, Fiona Shurlock, said: “We are absolutely overwhelmed by the support we have had – not only from football families, and non-league teams, but from Southwark Council and our local MPs, Helen Hayes and Harriet Harman.

“We are hoping to get a big turn out on Saturday at the match and rally.”

Dulwich Hamlet supporters are planning to hold a rally at Goose Green, East Dulwich, at 12.30pm on Saturday, March 17.