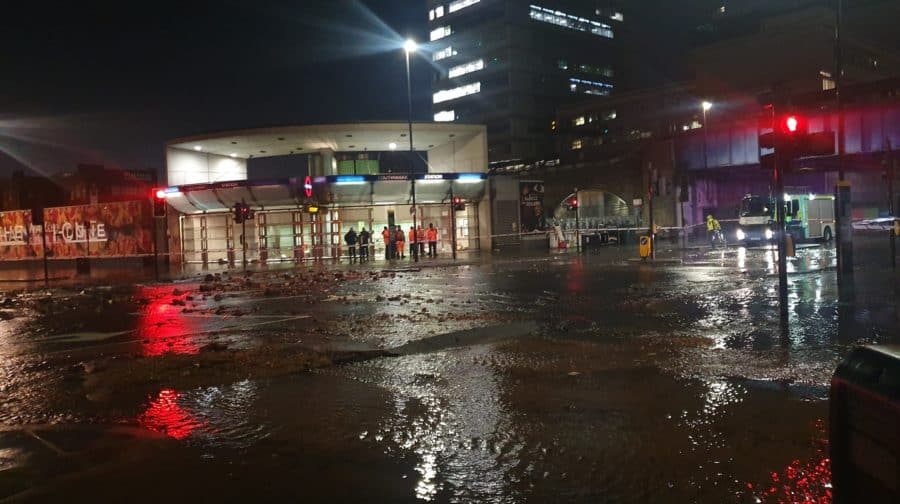 The scene shortly after the pipe burst Image: @guillaumephotos / Twitter

Homes in SE1 and SE16 have been left with no running water this morning while Southwark tube station has been closed due to a large burst water main flooding the station.

The burst pipe, on Blackfriars Road, has forced the busy station to close during rush hour shortly after 5am.

Road closures are in place. The London Fire Brigade has closed off a 30x30m section of The Cut as it deals with the incident. It said on Twitter: “Firefighters are at the scene of a burst water main outside #Southwark tube station.

“The station is closed and road closures are in place which is having a significant impact on local traffic. Crews will remain on scene throughout the morning.”

@BBCNews can someone report this below pipe burst at Southwark Station to relevant department or organisation. pic.twitter.com/onIZPF4RAX

Thames Water said: “Our specialist engineers are already in the area investigating the problem, and they will be doing everything they can to get things up and running as quickly as possible.

“We’re really sorry for any disruption this has caused.” The company has received hundreds of calls in the first couple of hours since the water pipe burst from residents affected in the SE1 and SE16 areas. Outages have been reported as far away as Camberwell.

SE5, SE15, SE17 and SE8 postcodes have also been affected by low water pressure or no water, said Thames Water.

Shortly before 9.30am, it added: “Our team were on site very quickly, and managed to stop the flow of water soon after arriving.

“The flooding has now drained away & water is returning to customers in the area.”

“I’m sorry but I’m unable to estimate the time that this will take to repair,” said a spokesperson in response to customers.

“We’ll get the repair carried out as quickly as we can.”

TfL has advised people to avoid trying to use the station, and to take the Jubilee Line from Waterloo instead.