Police said they found the 'large' kitchen knife stashed inside a sock in the car, alongside suspected hard drugs and cash 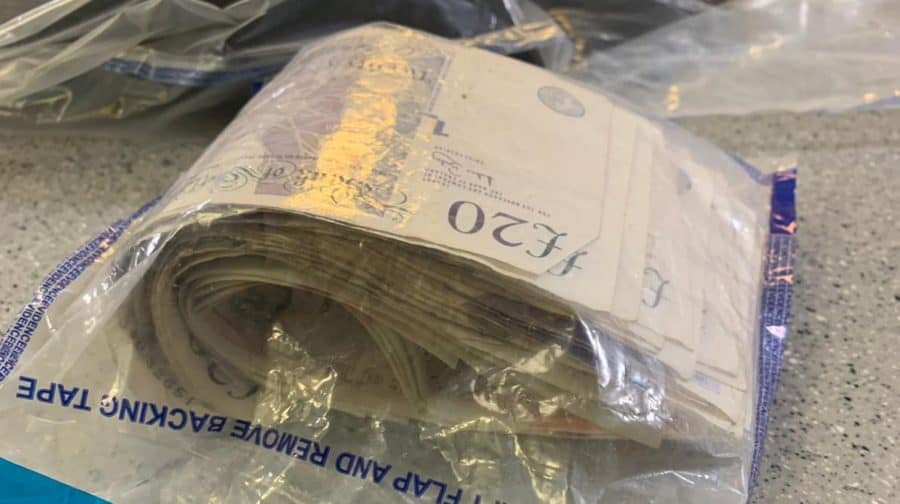 The cash officers seized from the vehicle

Police seized a large knife, seventeen bags of suspected class A drugs and cash in a vehicle stop in Deptford on Tuesday.

Officers from the Met’s Violent Crime Taskforce were on a routine patrol when they stopped the car at around 7.40pm in Windlass Place, close to the Pepys Estate.

As they approached, two men inside the car made to drive off, said police – but instead collided with the officers’ car. The pair got out of the car and tried to run away, but were chased by police.

One of them was arrested.

After searching the car, police found a ‘large’ kitchen knife stashed inside a sock, ‘suspected’ hard drugs and a three-figure sum of cash.

The car was also found to have fake number-plates, the Met said.

The man police managed to detain, who is in his twenties, is currently in custody in a south London police station.

He was arrested on suspicion of possession of an offensive weapon, aggravated taking and driving away and possession with intent to supply class A drugs. “This arrest and removal of a dangerous weapon, was the result of a routine stop and search patrol by officers,” said Detective Superintendent Sean Yates from the Violent Crime Taskforce.

“Positive efforts like this by the Taskforce and teams in the Met are helping us make great strides towards tackling violent crime and taking dangerous weapons and drugs off our streets.

Detective Superintendent Yates added the case should be a warning to criminals thinking of carrying a weapon, saying: “We have teams across the city, both in uniform and plain clothes, who are out 24/7 and committed to stopping this from happening.”

None of the officers involved in the stop were injured, Scotland Yard added, but their car sustained minor damage. It is currently being repaired.