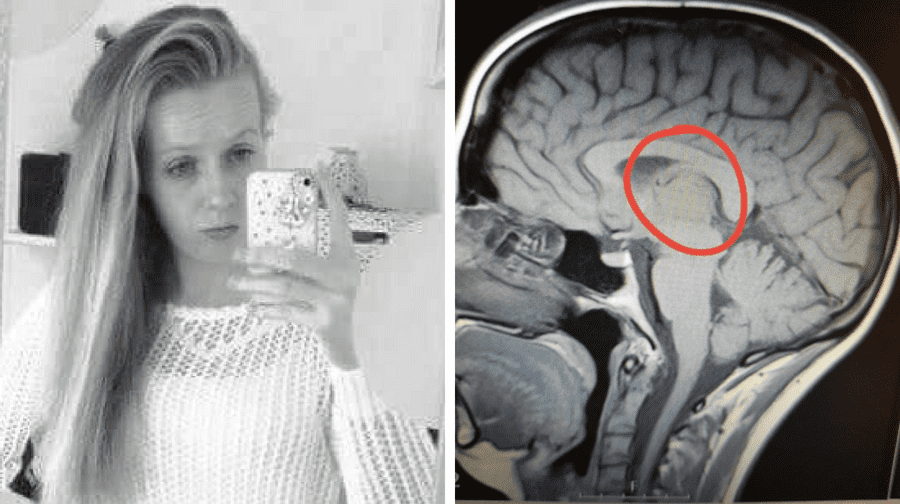 Christy Kelsey, 25, was diagnosed with a rare pineal cystic brain tumour after being told she just had migraines for ten years

A Bermondsey woman who was told she had migraines for ten years discovered she actually had a rare brain tumour.

But after the 25 year old’s symptoms took a downward turn in November 2017, she was sent to hospital where an MRI revealed she actually had a 7-8mm cystic tumour on the pineal gland of her brain.

Christy said she felt frustrated that the tumour, which the NHS is unable to operate on, wasn’t diagnosed sooner.

“For at least ten years I’ve always had headaches for no reason but I just got palmed off and told it was just migraines,” Christy, who has lived in Bermondsey all of her life, told the News.

“It’s frustrating because you know your own body and you know when it’s just a headache and when it’s worse than that.

“It was like ‘just take these tablets and go away’; it took something quite serious to get somewhere. Christy Kelsey, 25, was diagnosed with a rare brain tumour after being told she just had migraines for ten years

“From the start they’ve said all around it has calcified so it’s been there for at least ten years, and it could have been there forever.”

Christy said the tumour is so rare that only six surgeons in the world will operate on it so her life has been put on hold while she tries to raise £30,000 for a procedure in Germany.

“I was at London Metropolitan University studying a law degree and I had to stop when I got diagnosed, because of the memory loss,” she said. “How can I do an exam when I can’t even remember what I did yesterday?

“From what I’ve found out myself this country doesn’t really know a lot about that kind of tumour because it’s not cancer.

“But in Australia, America and Germany they take it out straight away because they know if it gets really bad it could turn to cancer or it could paralyse you.

“I do wake up thinking ‘what next’ because I know a girl younger than me who’s in a wheelchair and paralysed now.

“I would want to go to Australia because the surgeon there is the best in the world, but I have to be realistic so I’m trying to raise £30,000 to go to Germany.

“Even if it took some of the symptoms away I would be happy.”