Leak causes ceiling to collapse on top of teenager, 16, as she lies in bed 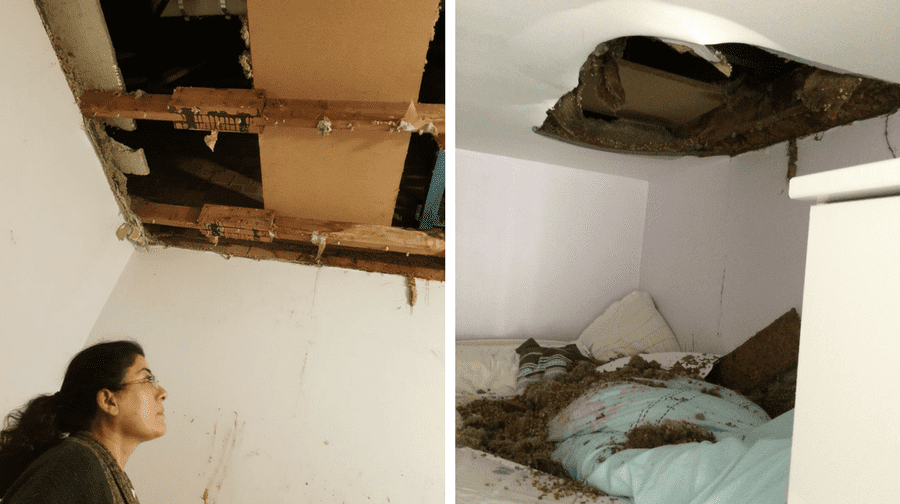 A mother has been left with a gaping hole in her ceiling after it collapsed on top of her teenage daughter while she lay in bed.

Aynur Sahin’s sixteen-year-old daughter was lying on the top bunk of the bed she shares with her older sister on Saturday morning when she heard a cracking sound.

But before the sixth form student had time to react, part of the ceiling collapsed on top of her and debris rained down on her bed.

Describing the moment it happened, Aynur said she was downstairs in the family’s two-bedroom maisonette when she heard her daughters’ screams.

“I was downstairs and my daughter suddenly screamed and said ‘Mum you need to come upstairs’ and I saw a big crack in the ceiling and my daughter was still on the bed,” said the 48-year-old teaching assistant, who lives in Walworth.

“We were all in shock but we got my daughter down and she was kind of traumatised – then we realised we needed to phone the fire brigade and they came within five minutes.”

Aynur said the fire brigade had to make the hole bigger to make the ceiling safe and that a council officer visited the same day, but the ceiling had still not been fixed on Tuesday. “They [the council] said they would put a temporary solution in place first but they haven’t fixed it since Saturday,” she said.

“It was leaking from the roof and they suggested that we put a bucket underneath – it’s unbelievable.

“I chased it up in the morning and the council said they needed to let the other residents know that the water needed to be shut down for one day for them to replace the pipes on the roof, as they think it’s a pipe that’s caused it.”

Aynur, who has lived in the property for sixteen years but bought it five years ago and refurbished it, said her sixteen and twenty-year-old daughters were sleeping in her bed while she slept on the floor in the living room.

The council is responsible for the upkeep of the actual building. Councillor Stephanie Cryan, Southwark Council’s cabinet member for housing, apologised and said the ceiling would be fixed as the News went to press on Tuesday.

“I am really sorry for the inconvenience this has caused Ms Sahin and her family, this did take us longer than it should have done to resolve and we did not follow our usual referral process, which I apologise for,” she said.

“We will review how this was dealt with to ensure the correct process is followed in future.

“The leak will be fixed today [Tuesday] and then will need to dry out for a few days before we can plaster and complete the required work.”

Southwark NewsNewsLeak causes ceiling to collapse on top of teenager, 16, as she lies in bed