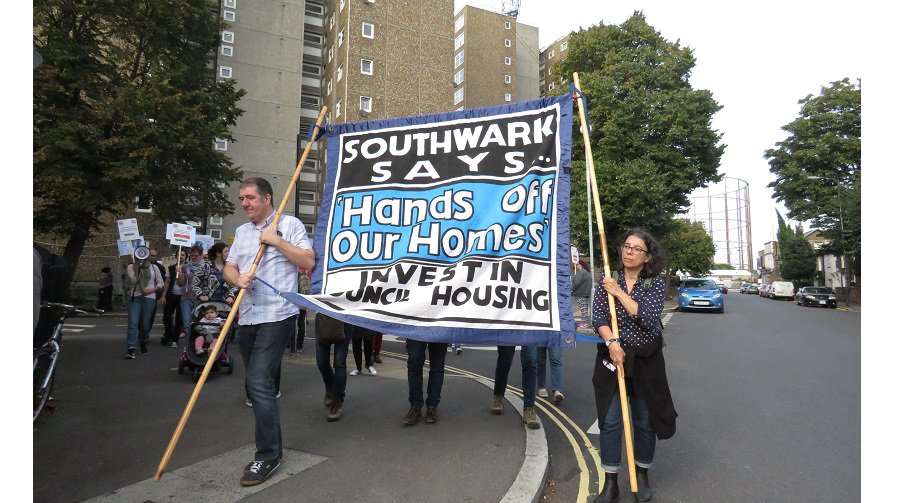 Ledbury estate residents marched around the estate on Sunday to express their “frustration” over the lack of heating in their blocks.

Hannah Majid of the Ledbury Action Group said residents had growing concerns about what would be done to heat homes and quickly re-house residents as the weather begins to turn.

“We did a protest last week about the lack of heating, and people being made to live in the cold,” said Hannan, 38.

“They’ve got no gas, and they need adequate cookers to be provided. So it was because of frustration that we called for everyone to come and have a peaceful protest. The reason we have come back this time is because no action has been taken. We’re asking the council to get their brains together and make sure people don’t freeze.”

The council said a new district heating system would be installed to replace the gas supplies by mid-to-late October. Gas supplies to the blocks were cut in August after it was found that the four tower blocks, built in the late 1960s, had never been sufficiently strong to withstand a gas explosion.

Cllr Stephanie Cryan, Southwark Council’s cabinet member for housing, said: “We are doing everything within our power to support residents on the Ledbury estate. We are working as fast as possible to get heating and hot water supplies to the buildings, helping people who want to move permanently or temporarily, and making sure people are updated regularly with as much information as we have. Housing officers are based on site to help with individual problems as they arise.

“We know the situation is far from ideal, but everything we have done has been with the safety and support of our residents in mind and most residents in the estate recognise that and have been working with us to resolve issues as best we can.”