The girls' school held talks from Stephen's brother Stuart, lessons on the racism and the law as well as fundraising for the Stephen Lawrence Charitable Trust. 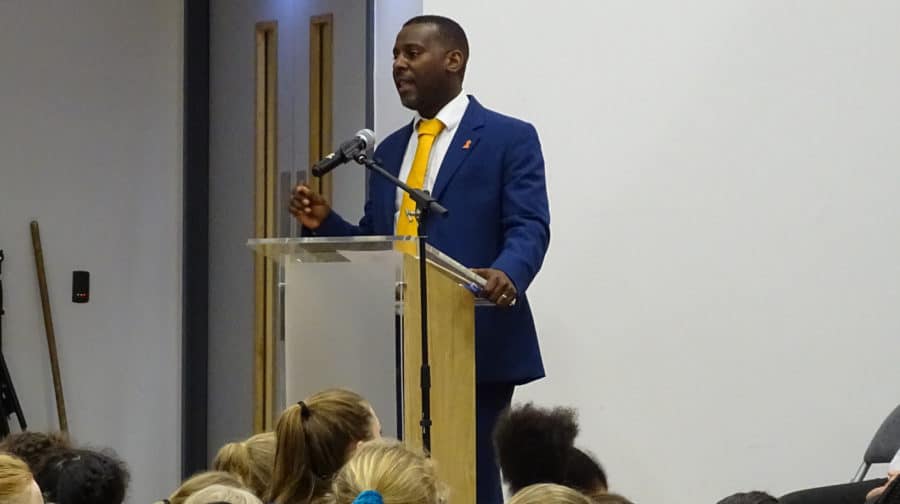 Stuart Lawrence leads an assembly on the legacy of his brother's murder at James Allen's Girl's School.

The life and legacy of Stephen Lawrence was celebrated with a week of talks, lessons and events at a Dulwich girls’ school this month, writes Josh Mellor…

Two assemblies at James Allen’s Girls’ School were led by Stuart Lawrence, the brother of Stephen Lawrence who was tragically murdered in 1993 aged eighteen.

The school held an orange own clothes day, his favourite colour, and took donations for the Stephen Lawrence Charitable Trust, which is dedicated to helping transform the lives of disadvantaged young people.

JAGS’ headmistress Sally-Anne Huang said: “‘Now, more than ever, it is important that young people learn about Stephen Lawrence’s legacy – the strive to ‘Live Our Best Life’ and the need to challenge racism and to value diversity.

“Moreover, the celebration of Stephen’s life, whilst demonstrating social awareness and education at its best, has been a hugely rewarding and joyful opportunity for our pupils.”

The events were held at the start of May, a week after Stephen Lawrence day which was on 22 April.

A public inquiry into the handling of Stephen’s case was held in 1998, leading to the publication of the Macpherson Report, which has been called ‘one of the most important moments in the modern history of criminal justice in Britain,’ and led to profound cultural changes to attitudes on racism, to the law and police practice.

Two of the gang of youths that murdered Stephen were eventually jailed in 2012 after the government scrapped the ‘double jeopardy’ principle that prevented suspects being tried twice for the same crime.