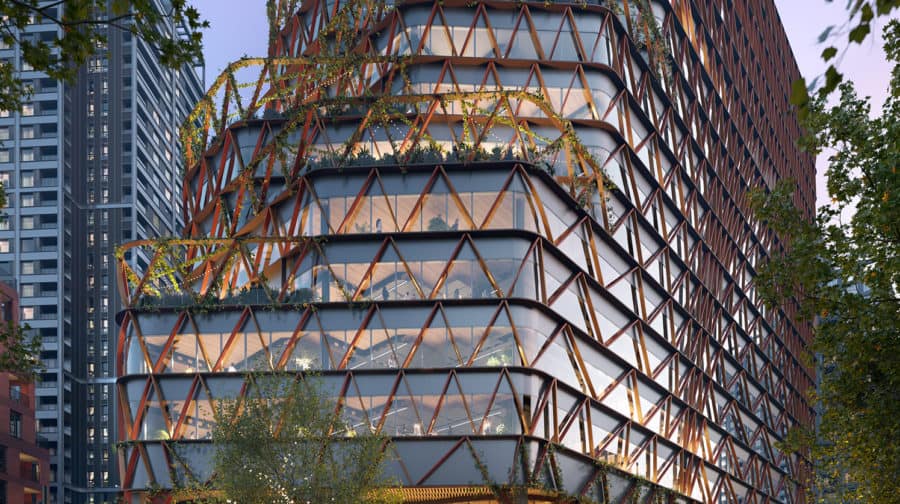 An artist's impression of the proposed building.

Nearly 400 objections have been received against Lendlease’s latest plans for an eighteen-storey office block in Elephant and Castle.

The Elephant Park developer says the application for the site known as ‘Plot H1’ will include a retail offering on its ground floor as well as community space.

Lendlease was granted Outline Planning Permission for the scheme as part of the £2.5 billion regeneration in the works since 2010, with details to be firmed up through subsequent proposals.

There will be no housing whatsoever on the site, with the developer saying the increased office space is responding to changes in the wider area. Objectors, however, have questioned the need for more central London office space given the impact of the pandemic and shift to working from home.

In a press release about the plan, Lendlease said the building would “aim to set new standards for workspace in the post pandemic world” and will include a “a publicly accessible lobby space for the local community, workers and visitors to meet, chat, relax and socialise”.

If approved, the developer says the building would provide “around ten per cent of Southwark’s projected requirement for new employment floorspace over the next fifteen years”.

Although Lendlease says it has fulfilled the housing obligations agreed with the council in the first stage of the masterplan, overall the scheme only includes 25 per cent affordable homes.

Jerry Flynn, from the 35% campaign which lobbies for affordable and social housing, told this newspaper: “Southwark has already caved-in twice to Lendlease – it only got 25 per cent affordable housing, instead of 35 per cent, and only a hundred of these homes will be social rented, out of nearly 3,000 in total.

“Social rented housing is needed more urgently than ever and it would be incredible if Southwark approved a scheme without a single housing unit.

“Southwark must reject this application and tell Lendlease to build the lost ten per cent affordable housing, housing that should have been provided all along.”

Formally objecting to the application via the council’s online planning register, one resident said they were “pleasantly surprised” by Lendlease so far but felt the office block would ruin the park and area.

“The style and height of the developments all work well with each other, the park is brilliant, especially hearing the kids laughter at the fountain, and seeing the park in constant use.

“This new office development is nothing like what has been proposed.

“Do we need an office building in the area, when many people are working from home…

“We need more apartments for locals.  There is an abundance of empty offices, fifteen minutes walk from here in London Bridge.

“It will be empty in the evenings and on weekends. It will block sunlight onto the park.”