People from boxing and football from across decades came together 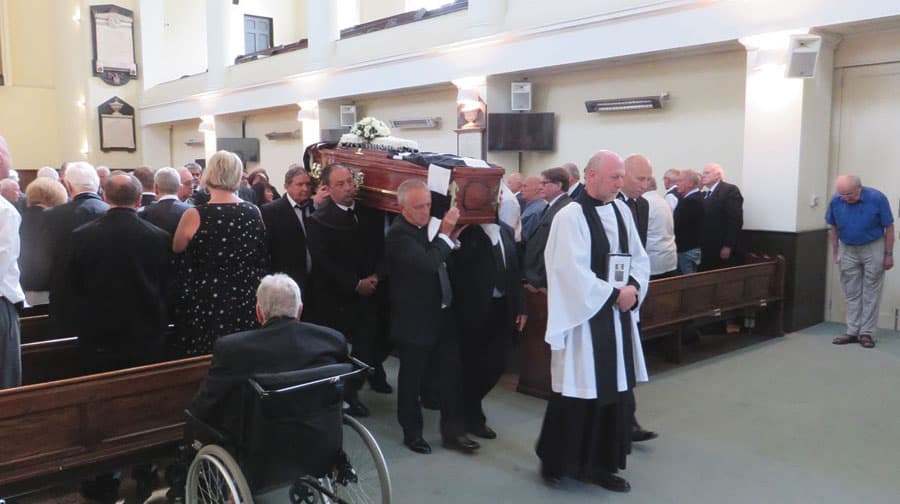 Bermondsey’s St James’s Church was a sea of black and white today as mourners packed in to pay their respects to Les Rowe.

The 83-year-old’s coffin was draped in the Fisher colours of black and white, as Albin’s Funeral Directors marched into the ‘You’ll Never Walk Alone’ track by Gerry and the Pacemakers . Members of the Fisher Downside Boxing Club and Fisher Athletic Football Club from across the decades came together, with a moving tribute by one of the footballers Les coached from the age of fifteen.

Dennis Sharp had the congregation laughing and shedding a tear as he recounted the life of a man that was hailed as matchmaker extraordinaire at the Fisher Downside Boxing Club in Druid Street Bermondsey, before making the extraordinary leap at the height of his fame in the 1960s to become Fisher Athletic Football Club manager. In another tribute Danny Ranshi said Les was best summed up as someone who always looked on the bright side of life, coming to his west London offices saying “the sun is always shinning.”  Before the packed church was given time to reflect to the soundtrack of Frank Sinatra’s ‘Fly Me To The Moon’. The King of Swing was also chosen as final song, with the coffin taken out of the church to ‘That’s Life’. Les, who was born and bred in Bermondsey but never married, was buried at Streatham Park cemetery, and laid to rest with his mother and father. The Stanley Arms in Bermondsey hosted a wake to celebrate a man that was clearly loved by generations of Bermondsey and Rotherhithe people.