'It seems while the rest of the world were commemorating the fallen, those in Camberwell Old Cemetery were left forgotten' 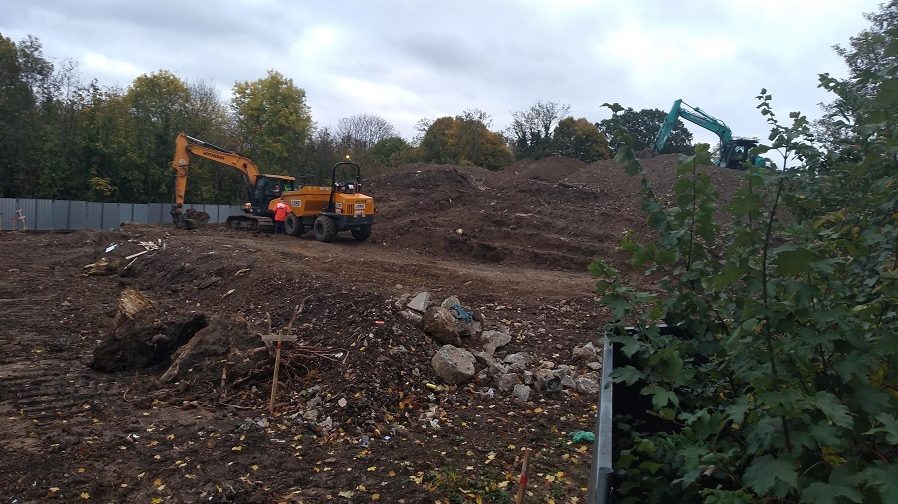 An area of Cemetery with war graves (c) Save Southwark Woods

A man who went to lay a poppy cross on a relative’s war grave at Camberwell Old Cemetery was horrified to find out a pile of contaminated rubbish had been left on top of the final resting place of 48 war dead – and it hasn’t been moved for FIFTEEN YEARS. David Rodgers, from Sevenoaks, went to visit his wife’s great-grandfather’s grave on Friday, November 9 as his wife was unable to go herself but wanted to honour him for last weekend’s armistice centenary.

Thomas William Best, who lived on Astbury Road, near Queen’s Road in Peckham, was buried and commemorated at Camberwell Old Cemetery after being killed at 37 years of age on April 26, 1918.

The Private from the 16th Battalion of the Sherwood Foresters, Nottingham and Derby Regiment left behind a wife, Ethel, and children Thomas, Stanley, Hilda and Lilly.

She remembers her grandfather Stanley telling her about his father who died in France from injuries in battle.

Mr Rodgers, a 53-year-old based in Sevenoaks, told the News: “Thomas died in 1918 and to mark 100 years since his death and also the end of the First World War we thought it would be nice to lay a poppy cross on his grave to commemorate him.

“It was to my horror that I found his grave appears to be covered over with a large mound of earth in a section of the cemetery that is being redeveloped by Southwark Council.

“It seems while the rest of the world were commemorating the fallen, those in Camberwell Old Cemetery were left forgotten.

“Whoever made the decision to do this should really be ashamed of themselves.”

Southwark Council says the rubbish was dumped illegally in 2003 and as it was contaminated with asbestos has been closed to the public ever since. The mound of earth on what was Private Best’s grave

Shockingly, 48 unmarked war graves in total have been left covered in rubbish for the last fifteen years and throughout the armistice commemorations.

A dismayed Mr Rodgers told the News: “It is very disappointing that this has happened and hadn’t been fixed by the 100 year anniversary of the end of this First World War.

“It does make you think – is this happening elsewhere as well?”

In response to a request by the News, Richard Livingstone, cabinet member for environment, transport management and air quality at Southwark Council said: “We are very sorry to hear of Mr. Rodgers’ distress on visiting his wife’s great-grandfather’s grave.

“Sadly, this and 47 other unmarked war graves were covered when illegal dumping occurred in this area of the cemetery back in 2003.

“The current works will remove this rubbish, while being careful to leave the graves beneath undisturbed.

“Forty-eight unmarked war graves have been located within the new burial area, which has been agreed with the Commonwealth War Graves Commission (CWGC).

“We will not be burying on top of war graves and we are working with the CWGC to ensure that all of these unmarked war graves are given the respect that they deserve.

“Dangerous contaminants such as asbestos were discovered in the dumped waste and this site has consequently been marked as unsafe and inaccessible to the public for the last fifteen years.

“The current works will open the area for public access again.

“While this area has been inaccessible, those buried in war graves have been remembered on a commemorative wall at Camberwell Old Cemetery, Private Thomas William Best is named among them.

“Throughout this development we remain absolutely committed to honouring all war graves, and will not bury over them in any circumstances.

“We are continuing to work with the CWGC and we are also looking at commemorating soldiers with Commonwealth War Grave headstones where possible.”

A spokesperson for the commission said: “We are very sorry that Mr Rogers was upset by the work taking place at Camberwell and can appreciate that this would have been distressing, particularly at this poignant time of year.

“However, we hope that the following information will demonstrate that this work is being undertaken to enable us to commemorate Thomas in a manner befitting his sacrifice.”

Save Southwark Woods campaigner Lewis Schaffer told the News he believed it was ‘an impossibility’ the war graves would not be buried over.

He says the exact location of the remains are unclear, and are buried among 48,000 other bodies, up to 20 bodies deep.

“Residents still haven’t been told do the planned layout for the new burial plots,” he said.

“But these 37 [sic] servicemen and women were buried on a shifting, muddy hillside almost 100 years ago.

“Their location was noted at the time on inaccurate paper maps.

“Now their graves will be covered by two metres of crushed building rubble and top soil, with new roadways and embankments on top. No one knows where their bodies are.”

“Why did the Commission wait until this year to start putting down markers in the rest of the cemetery?

“This burial project has to stop now and let the land return to the wild, with the war graves honoured by nature”.