At St Michael’s Catholic College, in Bermondsey, staff and students were overjoyed after building on last year’s results for both academic and vocational courses. 38 per cent of students achieved an A or A* grade across all subjects, and 58 per cent of all A-level grades were A*-B. The college commended Thomas Mulligan, who gained ... 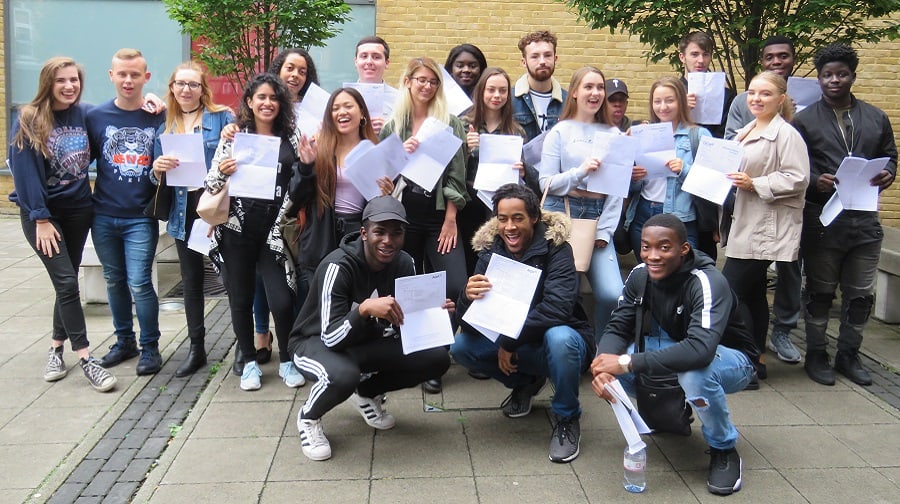 At St Michael’s Catholic College, in Bermondsey, staff and students were overjoyed after building on last year’s results for both academic and vocational courses.

38 per cent of students achieved an A or A* grade across all subjects, and 58 per cent of all A-level grades were A*-B.

The college commended Thomas Mulligan, who gained a place at Oxford University to read law at St Edmund Hall College, saying it was an “exceptional achievement”.

This means students will be attending both Russell Group and 1994 universities from September.

Zoe Ubom will study business management at Queen Mary University of London after achieving an A* in business, an A in Spanish, and a C in geography.

“I was happy with the A* and the A,” said the eighteen-year-old, who lives in Bermondsey.

“I was a bit surprised about my geography grade but I still got into my first choice university.

“My parents are excited to see me go to university.”

Holly Lancaster, also eighteen, will study history at the University of Southampton after achieving an A grade A-level in the subject.

“I was shocked because I didn’t expect to do that well,” said Holly, who also gained an A* in business and an A in philosophy and ethics.

“I didn’t sleep last night I was so scared. My mum was shocked as well because she was preparing for a worst-case scenario.

“My mum went to uni recently but I’m the first to go straight out of school.”

Ryan Bellenie plans to study philosophy at Newcastle University after gaining A grades in both media and business and a B in philosophy and ethics.

“I was relieved when I opened my results,” said the eighteen-year-old. “I hadn’t been worrying about them as much but I didn’t look at my UCAS, I just came in because I wanted to do it the fun way.”

Laura Szomanska walked away from sixth form with five A levels.

The eighteen year old will read law at Exeter University after achieving four A grades in history, law, Polish, and the extended project, and a B in philosophy and ethics.

“I just didn’t believe it,” she said of opening her results.

“I couldn’t figure it out at first; I already knew I’d got in to university but then I came in and seeing the results made it feel much more real.

“It still feels weird; I called my dad straight away and he was really happy.”

Jake Fernandes is off to study computer science at Warwick University after gaining an A* in maths and A grades in further maths, Italian, and Spanish.

“My heart stopped when I opened the results and then I was excited to be going to university,” said the eighteen year old.

“I’m more excited but I’m a bit scared to be moving away. Three or four of us will be going to Warwick.”

Emily Byrne will study history at Warwick after achieving an A* in history and A grades in philosophy and ethics, and maths.

“I was surprised at the maths results because I got a B last year and that was on the easier papers,” said the teenager.

“I’m really surprised but happy. I’m very happy with the A* in history – it’s my favourite subject.”

Headteacher Grainne Grabowski said: “We have amazing results again this year and it’s all down to the hard work and commitment of the pupils and the dedication of all the staff of St Michael’s who give up their time.”