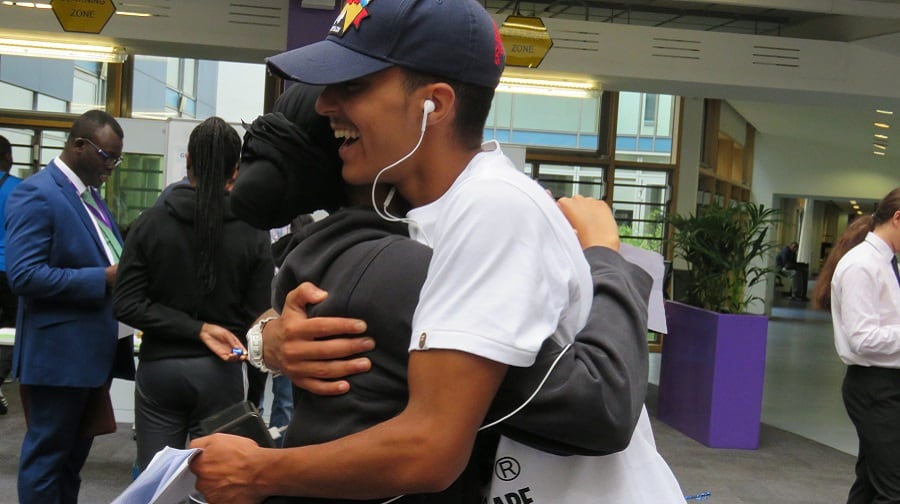 Students open their results at City of London Academy Southwark

Students queued up at schools and colleges across Southwark today to eagerly open their A-level results.

After years of hard work, Year 13 pupils tore open their results to find out whether they’d got the grades they’d been anticipating all summer.

There were celebrations and tears as students found out which university they would be going to – or whether they’d done enough to start the apprenticeship or training they’d hoped for.

And some schools were over the moon to achieve their best ever Year 13 results to date.

Provisional results suggest that the overall pass rate in Southwark remains stable at 98.7 per cent – which is above the national average.

The biggest increase in attainment was recorded in the number of entries achieving A*-A grades.

Compared to 2016, provisional results indicate there has been a 5.3 percentage point increase in exam entries scoring A*-A grades. This year 28.1 per cent of entries achieved the top grades.

Rises were also recorded across other grade boundaries. Early indications suggest that 55.6 per cent of exam entries achieved grades A*-B, an increase of 2.8 percentage points from last year.

“We hope that students will use these results as the foundation they need to fulfil their future aspirations, whichever path they choose.

“There are so many options available to young people.

“In Southwark we are proud of our apprenticeship and scholarship schemes which have helped so many young people begin a great career.

“Results day can be an incredibly anxious time and is the culmination of a lot of hard work from pupils.

“This set of results is an excellent reflection on pupils, teachers and parents from across the borough.

“These results demonstrate that Southwark schools remain a place where young people can thrive and reach their potential.”

The percentage of entries awarded the top A* or A is 26.3 per cent, an increase on last year.

The City of London Academy Southwark (CoLA), in Bermondsey, celebrated a strong set of results, with 79 per cent of students securing A*-C grades.

Richard Bannister, executive principal at the school, said: “It has been another fantastic year for the students at our academy who have achieved excellent exam results.

“This is their reward for all their hard work and the dedication and support by our team of excellent teachers.

“We are particularly pleased that over 95 per cent of our students are moving on to university, including Russell Group and Sutton Trust 30 institutions. This highlights true social mobility in action here in London.”

One student at St Thomas the Apostle College, in Nunhead, was over the moon to have achieved seven A-levels.

Emanuele Guidu achieved two A*s, three As and two Bs and will take up a scholarship at the University of Chicago.

Emmanuel Adepoju achieved A*s in maths and further maths and an A in physics and is going on to study mechanical engineering.

And Lydia Kadiri’s AAB grades mean she will be going to Nottingham University to study medical physiology and therapeutics.

The school wished the students well as they go on to study undergraduate degrees in chemical engineering, law, economics, pharmacy, PPE (philosophy, politics and ethics) and maths, among many others.

Headteacher Eamon Connolly said: “I am delighted for each and every one of our students for these excellent results; both those who have been with us since the age of eleven and those who joined our new sixth form in 2015.

“I am proud of the achievements and feel confident we have prepared them, both academically and personally, to enter adulthood and embark on their chosen degrees as fine young men and women.”

At St Michael’s Catholic College, in Bermondsey, staff and students were overjoyed after building on last year’s results for both academic and vocational courses.

38 per cent of students achieved an A or A* grade across all subjects, and 58 per cent of all A-level grades were A*-B.

The college commended Thomas Mulligan, who gained a place at Oxford University to read law at St Edmund Hall College, saying it was an “exceptional achievement”.

This means students will be attending both Russell Group and 1994 universities from September.

Headteacher Grainne Grabowski said: “We have amazing results again this year and it’s all down to the hard work and commitment of the pupils and the dedication of all the staff of St Michael’s who give up their time.”

Sixth formers and staff at co-educational school Alleyn’s, in Dulwich, were left smiling from ear to ear after achieving their best ever number of A* results.

It was a standout performance for the school, with almost 60 per cent of the students achieving at least three A grades, and 27 individual students gaining three A* grades or better.

Headteacher Dr Gary Savage said: “I am delighted for our boys and girls, their parents, and for our community all of whom work so hard to support, steer and encourage the students to enable them to achieve such fantastic outcomes.

“Our Leavers of 2017 have achieved a record-breaking proportion of A* grades, which is incredibly impressive.

“Crucially, all our boys and girls also leave us with a kind and positive outlook, strengthened over the years by our enduring school ethos which equally values the co-curriculum, the building of character and the forging of lifelong friendship.

“Alleyn’s is undoubtedly one of the very best co-educational schools in the country, and I am very proud indeed of what is being achieved here.”

Around a third of all A-level grades at the Dulwich school were A*s, 70 per cent of all grades were either A* or A, and 91 per cent were A* to B.

Almost half of the students at the school achieved at least three A*s or As.

Success was achieved in a wide range of languages, from French to Russian, to Japanese and more in between.

English was also a notable success with over 90 per cent passing at A* or A.

The Charter School, in Herne Hill, celebrated its best ever A-level and BTEC results today.

74 per cent of students achieved at least one A grade or equivalent and 25 per cent achieved all A grades or higher.

It is expected that the vast majority of students will take up a place at their first choice of university or college for further study, including students heading to Oxford and Cambridge.

100 per cent of BTEC grades achieved were Distinction*/Distinction and 50 per cent of all students gained at least three A levels with A* to B grades (up from 41 per cent in 2016).

Headteacher Christian Hicks said today: “These are absolutely outstanding A-level and BTEC results and are down to the perseverance and focus on excellence shown by all of our students and their teachers.

“The results are especially pleasing given the fact that many of the subjects have had to teach a brand new curriculum over the past two years following the government’s exam reforms.”

Full coverage for The Charter School

Staff and students at Sacred Heart Catholic College, in Camberwell, were celebrating after a third of all entries achieved A* and A grades this year.

One third of all of entries achieved A* and A grades, and 60 per cent achieved a grade between A* and B.

37 per cent of pupils gained three A-levels at A*-B.

Headteacher Serge Cefai said: “I am very proud of all our pupils and their A-level results which have ensured that 98 per cent of our cohort will be attending university or a higher level apprenticeship.

“This is a remarkable achievement in the current climate of higher grade boundaries and new A-level courses.”

In the following subjects, over 80 per cent of pupils gained an A*-B grade:

Staff and students’ hard work paid off to produce an average grade of C+ across A-level and Level 3 vocational results.

Ark Globe Academy in Elephant and Castle only opened its sixth form in September 2015, but its results are already “well above the national average”.

Its batch of A-level results showed a 100 per cent pass rate, with all its students getting at least three E grades. And 47 per cent of students earned three A*-B grades, up from 30 per cent last year.

What’s more, 100 per cent of students were offered a place at a university. And 60 per cent secured places at elite Russell Group universities – compared to the national average of 23 per cent.

Globe’s principal, Matt Jones, told the News: “Many of these students will be the first in their family to go to university. The context at our school is we’re in an area where a high proportion of pupils are from disadvantaged backgrounds.

“Grades are important, but they are only a stepping stone towards good futures and careers. So our school emphasises the journeys our pupils are taken on.

“This is only our second year form, and despite the change to the A-level results changes we’re getting outstanding results.”

This year’s students – its tenth after opening in 2007 – achieved 51 per cent A*-B grades, up one per cent on last year.

And 100 per cent of its students managed to pass with three A*-E grades, also up one per cent from the previous year. And it was also a 100 per cent pass rate for students who took on four A-levels.

The school in Albany Road, run by the Ark charity, was most recently rated “Good” by Ofsted inspectors.

Harris Academy Bermondsey also achieved a 100 per cent pass rate across all subjects.

A statement from the Harris federation said the all-girls school also had “over half” of all grades at A*-B.

Among the Academy’s top performers were: