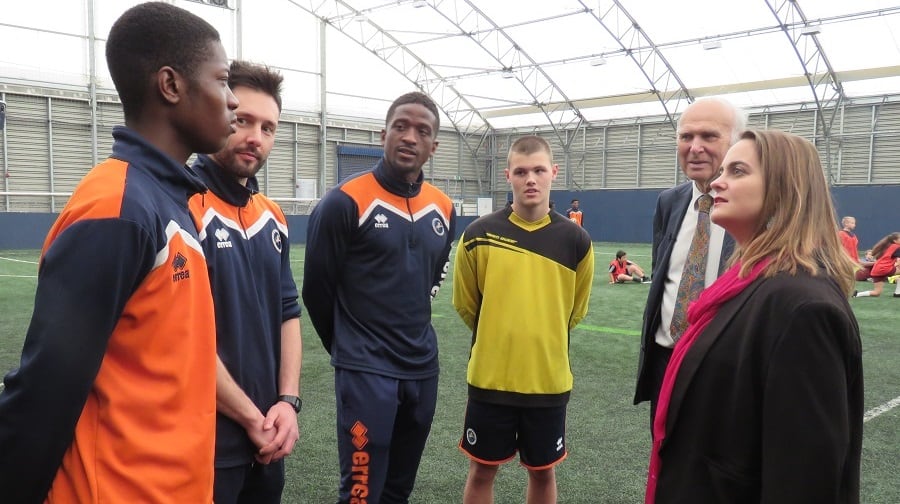 Liberal Democrat leader Sir Vince Cable said it would be “absolutely tragic” if Millwall was forced out of the area by development plans.

The club’s chairman John Berylson confirmed he had kicked off the search for a new home at the end of last year in the event Lewisham Council tried once again to seize the land to sell to developer Renewal for its New Bermondsey scheme.

Speaking to the News at The Den today, Wednesday, Sir Vince said it was time Lewisham had a voice from the opposition.

“The fact it’s a one-party state here – you just need a new voice for Millwall,” he said.

“The worst-case scenario is that the club would be moved away and that would be absolutely tragic. “I just can’t understand why the council can’t recognise its [the club’s and the community trust’s] potential.”

The parliamentary candidate, whose party came third behind Labour and the Conservatives in the contest for the seat during last year’s general election, said she would put “additional pressure” on Lewisham council if elected next month.

“At the end of the day, this has gone on way too long and what’s been happening is absolutely atrocious,” she told the News. “Every time you hear more about it, it just beggars belief.

“The council talks about how it wants to tackle things like childhood obesity and create better social cohesion and yet they have a perfect example of community projects that do the hard work at a very cost-effective price so it’s incredibly short-sighted for them to not invest in this kind of community work. “As an MP there’s a different level of media attention you can bring to things; you can ask questions in Parliament, there’s a level of accountability between council and parliament that can help to get this resolved.”

Ms Salek added that she would expect a “considerably larger” amount of social housing to be offered in the development plans given the impact it would have on the area if it went ahead.

Jordana Malik, director at Renewal, said: “We have already welcomed Lord Dyson’s comprehensive inquiry report and its conclusions that Renewal has demonstrated significant investment and a real commitment to carry out the scheme.

“New Bermondsey will transform an underused 30-acre industrial site in the northern most tip of Lewisham into a groundbreaking new neighbourhood.

“As New Bermondsey is one of the Mayor of London’s Housing Zones it is expected to achieve at least 35 per cent affordable homes and Renewal are working towards this.

“We agree that Millwall Football Club is a vital part of the culture and community of north Lewisham, and as such, Renewal’s vision from the outset has been to incorporate a successful, self-sustaining football club at the heart of the proposed development.

“MFC were a party to the original S106 Agreement relating to the planning consent issued to Renewal in March 2013 and will not have to leave their current ground as a result of the land ownership change.

“Furthermore, Renewal looks forward to the upcoming meeting with Millwall and Lewisham Council and we will continue to make every attempt to move these discussions forward.

“All three parties are in agreement that the regeneration should happen, and that Millwall FC should have its future secured as a thriving football club at the centre of New Bermondsey for many years to come.”

A spokesperson for Lewisham Council said: “We are proud that Millwall Football Club has called Lewisham home since 1910 and want them to stay here for generations to come.

“That’s why we let the football stadium to Millwall Football Club on a 150-year lease until June 24, 2143, and gave them access to a stadium at rent levels originally set in 1993, which have not been reviewed since then.

“We are committed to working with the Millwall Football Club and all interested parties to bring homes and jobs to New Bermondsey and to ensure the football club remain in Lewisham.”