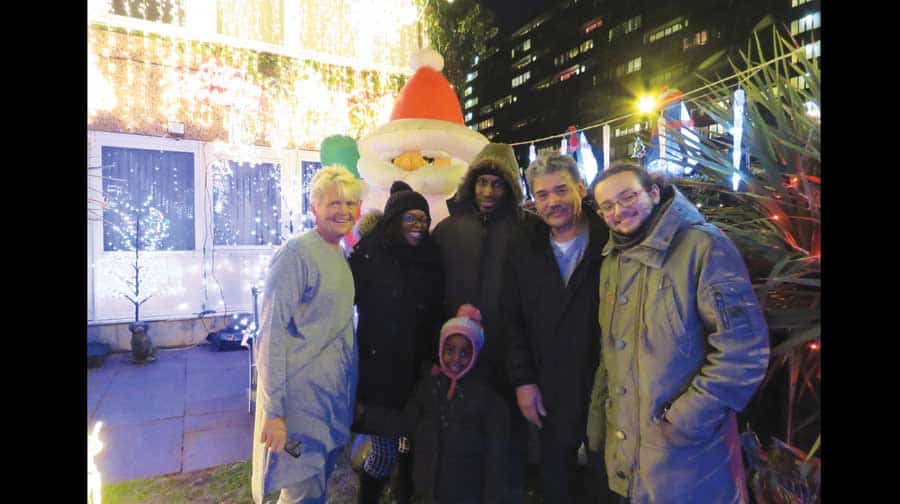 A Walworth father whose son’s life was saved by a charity that registers donors for bone marrow transplants has honoured them with yet another dazzling Christmas display, writes Chloe Livadeas…

The charity, Anthony Nolan, manages the UK’s largest stem cell register in order to match patients who have a blood disorder and need a transplant.

Alex was four-years-old when he was diagnosed with leukaemia. It was round about this time that the family started putting up Christmas lights. Since then it has snowballed into a festive community landmark and has even grown to their upstairs neighbour’s flat.

When Alex was twelve-years-old, his health deteriorated once again and he was in desperate need of a bone marrow transplant and none of his four sisters were a match. It was then that Anthony Nolan came forward with a match for Alex, saving his life. Now the family go the extra mile to light up the Aylesbury Estate in order to raise money and awareness for the charity.

Alex’s dad, Gunalty Mustafa, said: “We don’t want the money for us, we just want to raise awareness and give something back at Christmas time to help other families like us.” Mum Donna added: “If it wasn’t for them he wouldn’t have grown into the man he is today.”

Alex said: “Now that I’m older I’ve realised how lucky I am, and I think of all those people I saw on the ward who weren’t as fortunate as me. I hope that the money will mean more research for Anthony Nolan.”

The lights cost the Mustafa’s around £30-£40 a week in electricity bills. Gunaltay said they always hit the January sales to buy more. Local children have been coming by to take photos in front of the lights and the inflatable Santa. A sign on the Mustafa’s wall invites people to donate to the trust.

Donna said the family have been getting a lot of support from the community and beyond: “We’ve been getting so many lovely comments of Facebook and phone calls from parents who are in the same predicament as we were.”

It costs £60 for Anthony Nolan to put someone on their register. They therefore rely on financial donations like this from the public. Lawrie Mallyon, Senior Community Fundraiser at the charity, said: “This lovely fundraising initiative, ‘Alex’s Lights’, will also help raise vital awareness of Anthony Nolan’s work. In addition to supporting the charity, Gunalty’s beautiful light display will bring joy to the neighbourhood over the festive season.

“In raising funds, and awareness, Gunalty will help Anthony Nolan give blood cancer patients, like his son Alex, a second chance of life.”

Gunaltay said the family will do the display “as long as we’re kicking”. “We have to think of new things for it every year”, he added.

Anyone who would like to make a donation this Christmas can visit www.anthonynolan.org/christmas and quote ‘Alex’s Lights’