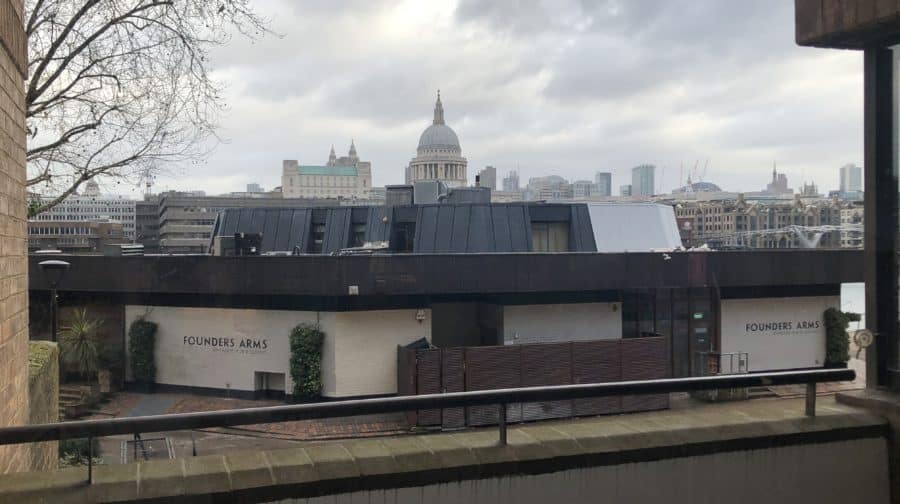 A view of the Founder's Arms from Falcon Point

Local residents have criticised plans for the extension of the Founder’s Arms on Bankside, arguing that it will create more noise, block people’s views and allow drinkers to see into nearby flats, writes Kit Heren…

The News reported earlier this month on the plans submitted by pub owner Young’s & Co. to Southwark Council to add a new bar and dining area, noting that the company said it got a generally positive reaction from local business group Better Bankside and that there was only one objection on the application.

But residents of the Falcon Point block, directly behind the Founder’s Arms, later said the council had not told them about the plans and the first public notice was posted on a pole outside the pub on March 19.

A spokesperson for Southwark Council said on March 22 that letters were being processed and would be sent “imminently”.

Founder’s Arms pub could get new bar but objections raised

Falcon Point residents set out their concerns to Young’s in a February letter seen by the News.

“We will vigorously oppose any planning application that may be submitted if the proposals are anything like those on which we were recently consulted,” residents told Young’s.

The group’s main arguments against the extension are that a “significant number of flats” will lose their view of the Thames; people in the new part of the pub will be able to see into some flats; more people and more deliveries will mean more noise, “like having one of those party barges moored permanently in front of us”; and that the area is mainly residential.

Falcon Point residents also argue that the plans are out of character with the area “Architecturally the proposal would despoil an important aspect from the river and the north bank. This is crude architecture and construction completely at odds with the [existing] building”.

Young’s said in the planning statement that the proposals are “an appropriate design solution”.

Planning documents show the company consulted Falcon Point residents in 2018 and adapted its proposal before submitting it.

A spokesperson for Young’s said it was important for the company to engage with its neighbours on the proposals, and it was pleased that locals took part in consultations, resulting in changes to the plans before they were submitted.

The spokesperson added: “We responded directly to concerns raised by residents of Falcon Point, including reducing the height of the proposed extension, introducing obscure glazing to protect privacy, and the introduction of a comprehensive Delivery and Servicing Management Plan and Noise Management Plan.

“The Founder’s Arms is an important part of the Falcon Point Estate and our proposals will improve the facilities and appearance of this popular pub.”

Young’s added in its planning application that the extension would create 22 jobs at the peak of summer business. The company also pointed out that pubs have been hit hard in the Covid-19 and investment like this scheme is key for the sector.