The event was organised by the For Jimmy charity, which was set up to honour murdered teen and Millwall fan Jimmy Mizen and raise awareness about the tragic consequences of youth violence 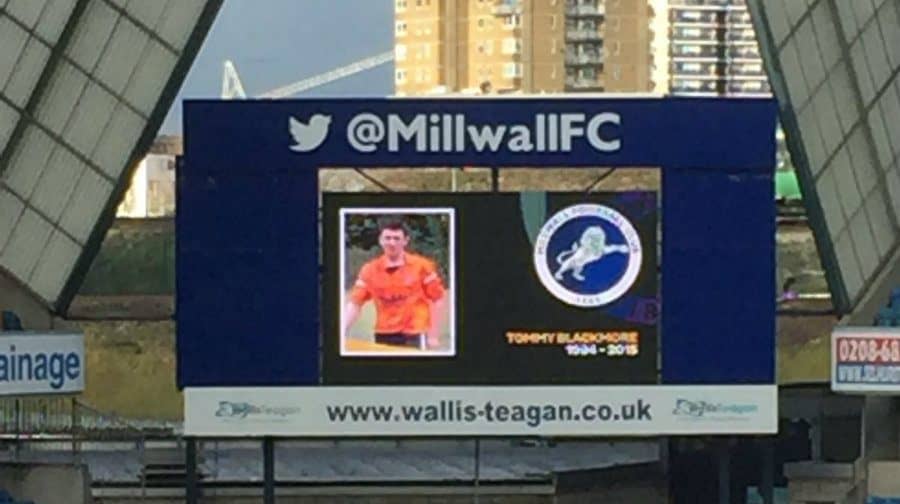 Tommy being honoured on the big screen at The Den

Millwall fans paid respect to the family of Bermondsey boy Tommy Blackmore last weekend when his brother took part in a special pre-match display with seven other grieving families.

The event was organised by the For Jimmy charity, which was set up to honour murdered teen and Millwall fan Jimmy Mizen and raise awareness about the tragic consequences of youth violence.

Bradley Blackmore was applauded on the pitch as he held a Lions shirt aloft with Tommy’s name and the number eight emblazoned on the back.

He said: “It was a really big reception. Obviously everyone was applauded, there was a West Ham fan there and he was applauded, but when Tommy and Jimmy’s name was read out it was a huge roar. It sends goosebumps down my back just thinking about it.”

He said it was an important experience to meet Jimmy’s family and the families of Alan Cartwright, Sam Guidera, Rob Knox, Godwin Lawson, Danny O’Shea and Connor Saunders, who were all killed due to youth violence.

Bradley said: “With your own family and friends you leave a barrier up, do you know what I mean? You don’t want to upset them so you get upset by yourself. But these people understand so you can drop your guard.”

He watched Millwall’s 3-0 win over Blackpool, along with the other families, in Millwall chairman John Berylson’s box at The Den.

Mr Berylson said: “We are delighted that so many other London clubs have chosen to become involved with Jimmy’s Day at The Den on Saturday, and that all these young people who died in such tragic circumstances will be remembered and celebrated.”

He added that Jimmy’s parents Barry and Margaret were “an inspiration.”

Barry Mizen MBE said: “The wonderful ongoing support of everyone connected with Millwall, gives us the strength and encouragement to continue working for change to keep our young people, children and grandchildren safe. Come on you Lions.”

Tommy died in June when convicted drug dealer Lloyd Smythe, 29, from the Tabard Gardens Estate, Borough, delivered a “boxing jab” to the head outside Mono Lounge nightclub near Tower Bridge on June 12.