The event, a first-of-its-kind, was held on Saturday evening at Peckham Levels, Rye Lane, and saw local politicians probed on issues facing minority ethnic groups across the borough.

Nuala Riddell-Morales, director of the Carnaval del Pueblo Association, a charity that puts on cultural events for the Latin-American community said:  “It’s an opportunity for people to ask the things they want to ask. We’re really excited about it.”

Topics of discussion included racial inequalities, the expulsion of traders from the Elephant & Castle shopping centre, regeneration, gentrification and more. 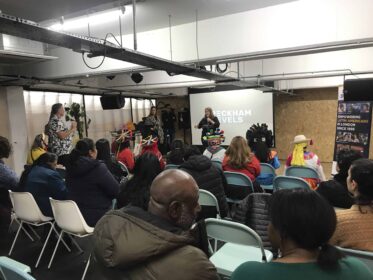 A hot topic was Southwark’s numerous regeneration and development projects and whether they really served local people.

Kieron Williams blamed the Conservative party, saying that rule changes had made it easier for developers to push proposals through.

When asked about the expulsion of traders  out of the shopping centre due to Elephant and Castle’s regeneration, he said: “When I speak to people around the country, they are amazed by how much we’ve engaged with the local community.”

This drew groans from the crowd with one woman saying “this is a fantasy!”.

Peter Baffoe of the Greens said: “The process hasn’t been as good as it should have been.

“We need to see what pressures we can put on private developers to ensure our traders aren’t after-thoughts but are right at the start of the planning process.” 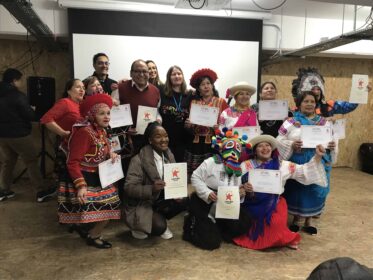 People were awarded certificates for participating in the Carnaval del Pueblo’s entry into the London New Year’s Day Parade.

All the councillors said they wanted to see the Carnaval Del Pueblo reinstated, a Latin-American festival held in Burgess Park that has been cancelled since January 2011.

Peter Baffoe said: “We will do everything we can do to ensure the celebration can continue.”

Kieron Williams said: “It would be great to get it back in the borough” and pointed out that funding was available for cultural events through the Southwark cultural celebrations fund.

The council recently gave the organisers of Carnaval Del Pueblo a £10,000 grant which will fund a smaller event to take place in August.

The prospective councillors were also quizzed on how they would help residents during the cost of living crisis.

Kieron Williams said the council had set up an emergency support fund and an energy support scheme and, as the largest council landlord in London, was offering cheaper rents than the private sector does.

Peter Baffoe said there had been a decline in community and charity groups and that the council needed to end competitive grant funding that pits groups against each other.

After the hustings event ended there was a party, with visitors treated to Colombian drumming and a Bolivian DJ.

The event was organised by the Southwark Latin American Network and R.E.A.C.H, networks of community organisations supporting Southwark’s Latin-American and black communities respectively.

Comment: Get on our Soap Box and please do go out and vote on May 5th so the council represents you!