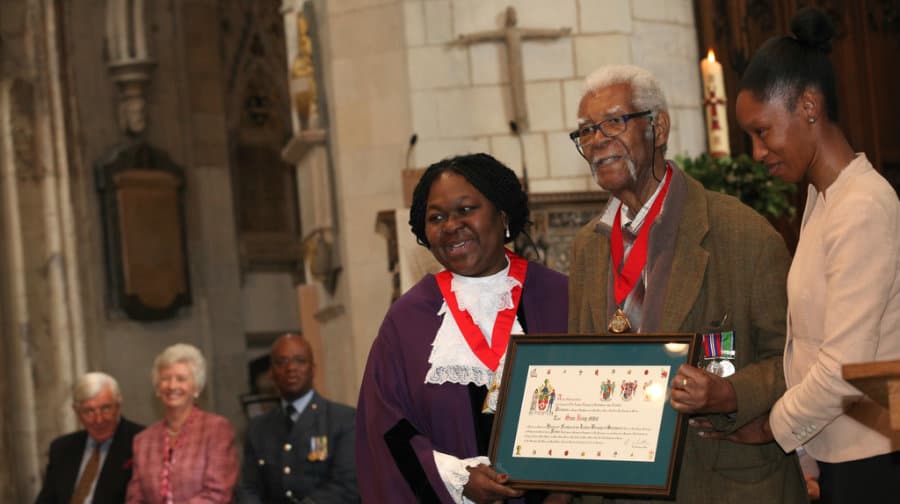 Tributes have been paid to the late Sam King MBE, the first black mayor of Southwark who become renowned for his contributions to London’s black culture.

Mr King’s death was announced by his granddaughter on Saturday. He passed away at the St Christopher’s Hospice at the age of 90.

Perhaps the most pivotal points in his life was his decision in 1944, aged 18, to leave his farmland home in Portland, Jamaica, to join the RAF as an engineer.

He returned to UK in 1948 aboard the famous SS Windrush, and moved to Sears Street in Camberwell to become a post man.

The first ever black publication, the West Indian Gazette, was co-founded in Brixton by Mr King in 1958. That same year, he and his colleague at the Gazette, organised the first incarnation of the Notting Hill Carnival, which went by the name of The Caribbean Carnival, at St Pancras Town Hall.

The former mayor of Southwark, councillor Dora Dixon-Fyle, said she felt “immensely proud” to present Mr King with his Freedom of the Borough award on May 14 at Southwark Cathedral.

Dora told the News: “[his death] was sad I broke down in tears at the thought of it. He wasn’t a relation to me, but he has always been there. He was a legend.

“A lot of us politicians, especially those with BME backgrounds, really looked up to him, but he inspired everyone, he crossed boundaries.

“The first time I met him was in 1998 when he released his book, ‘Climbing Up the Rough Side of The Mountain’. I remember the way he spoke, he had such a booming, powerful voice.

“Even last month at the civic awards, I had to help hold him up with his granddaughter because he was so frail. But his voice was so strong and compelling, he filled a room and he was so concise with his words had everyone captivated.”

Black-heritage author Stephen Bourne wrote about Mr King’s life in two of his books: ‘Speak of Me as I Am’ and ‘The Motherland Calls’.

Stephen told the News: “I shared a platform with Sam during Black History Month in 1998 when we both launched our books, and we have bumped into each other many times.

“Something very important that Sam gets overlooked for was his help in ending the Brixton and Peckham uprising. He was one of the first black community leaders to consult with the police about how to end the violence. Another thing that not a lot of people know is that Sam met Martin Luther King when he stopped in London and at the Gazette officers on his way to collect is Nobel Prize in Oslo.

“I have always described him as a true gentleman. He would always give you the time of day and he always spoke with such humility and personal touch.”

Mr King spent his later years living in Warmington Road in Herne Hill, where his Blue Plaque was unveiled in January 2009.

Tributes were also paid on Twitter by leading and local figures from the Labour Party.

Councillor Peter John, leader of Southwark Council, said: “When Southwark elected Sam King as its first black mayor in 1983, it was a major step towards making it the dynamic, diverse and welcoming borough it is today.

“I am saddened to hear of his passing, but remain inspired by his incredible life story, from the Caribbean, to WW2, to England on the Windrush, and on to become a major voice for the black community and co-founder of the Notting Hill Carnival. He leaves a great legacy, and will be missed.”