BBQs are still banned by Southwark Council in its parks 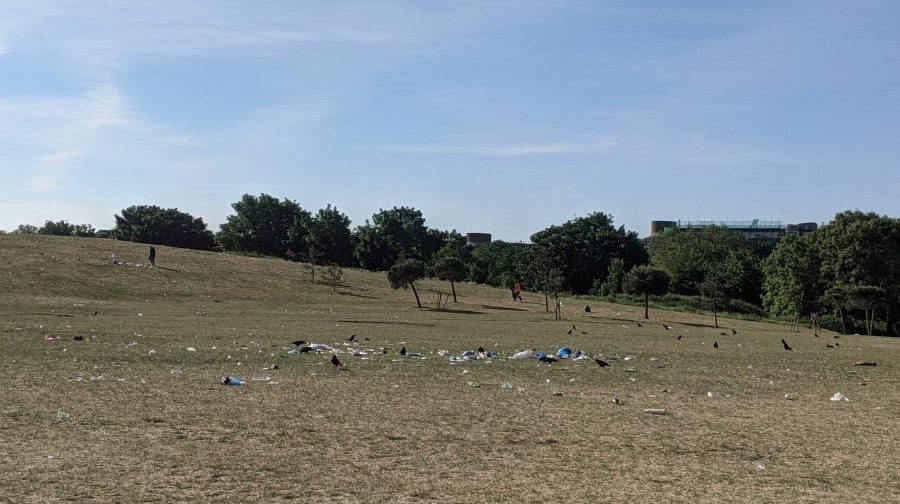 Rubbish strewn across Burgess Park, with trees in the background

The lockdown in Southwark appeared to be well and truly over this bank holiday as scores of people met up for BBQs, picnics, football games and parties – complete with loudspeakers – in parks across the borough, leaving piles of rubbish in their wake.

Bins were overflowing in Burgess Park with glass scattered over areas where large groups had been congratulating to listen to music. Some had even put up gazebos, seemingly unafraid of getting fined.

Grass was left scorched by BBQs – currently banned in all Southwark’s parks – and, due to public toilets still being shut during the pandemic, human waste, toilet tissue and baby wipes were strewn in bushes. One pet owner told us their dog had to be rushed to the vet due to being injured on broken glass. Others tweeted Southwark Council to complain, including resident Gus Ballentyne, who described the park as being so full of rubbish it resembled ‘a landfill site’.

the damaging consequences of "unlimited amounts of exercise" and picnics in the park. so sad to see on my walk to work this morning @lb_southwark @BurgessPk #lockdown #burgesspark pic.twitter.com/4Fzm3TXiK3

In an unverified video posted online and claiming to be from bank holiday Monday, police vans dispersed a huge group in the park – tallying with what residents on the nearby Aylesbury Estate have told us was a long weekend of police helicopters and sirens going back and forth down Albany Road. Nice to see the Cummings example in no way encouraging people to relax social distancing today… just the 3 football matches in Southwark Park today, 1 with a net and cones! @lb_southwark @MPSSouthwark pic.twitter.com/buvNW0GpjB

Hugo Wareham, a member of the  the Friends of Burgess Park group that helps look after the park for the community, was one of those disgusted by the behaviour – and upset on behalf of the dedicated council staff left cleaning up.

He claims there is minimal police presence during the day, and says the unfenced park needs more routine patrols.

“There is next to no social distancing. “We do realise that Burgess is a big park to manage but at the moment there is absolutely no management of illegal activities or a general police presence .

“People are doing as they please – BBQs reported at 12 noon to 101 are still there at 5pm.

“People are blatantly smoking and dealing drugs – no police, no council.

“When we venture to the Royal Parks or Kennington Park there are many police officers and yet in the largest park in Southwark we have no police for days – we need our councillors to be on top of this as well as the police.”

Southwark’s borough commander, Chief Superintendent Colin Wingrove, told the News: “Our policing approach across Southwark remains as before with our officers positively engaging with our communities and explaining the self-distancing regulations.

“We continue to police by consent and enforcement remains the last resort.

“The vast majority of the public are adhering to the government restrictions and we thank them for their continued efforts.

“Burgess Park is patrolled regularly and is included in our patrol plans. Like many of our parks and open spaces it has been busier since the lockdown rules changed and weather improved.

“We work closely with Southwark Council wardens in patrolling Burgess Park and making it a safe and enjoyable place for everyone to visit whilst complying with the self-distancing regulations.

“We will continue to work in partnership and maintain regular visible patrols in parks and open spaces across Southwark.

Deputy leader at Southwark Council, Rebecca Lury, thanked those who were following the guidelines and protecting the wider community while respecting shared spaces in the borough.

THIS ? went for a run around Burgess Park this morning and was so annoyed to see piles of rubbish everywhere. https://t.co/obmVEDX61q

She confirmed the parks were patrolled ‘seven days a week’ and said visits had increased during the busy bank holiday.

“Any illegal behaviour seen by residents should be reported to the police, and we have been supporting this process with intelligence from officers and  CCTV,” she said.

“We ask that people please take their litter home with them. There is simply not enough capacity in our park bins to manage a huge amount of additional rubbish, despite extra cleaning staff being deployed over the bank holiday.

“Barbecues are not currently permitted in any of our parks, and there is signage telling visitors this. Our staff did challenge people about their use and stopped barbecues over the weekend.

“However, we appeal to people to use common sense when using our parks.

“We are still in lockdown and are still fighting a deadly disease. Please think of others and stay at home as much as possible. When outside you must stay at least two metres away from other families, and please respect park staff and all park users.”

READ MORE: Give some people an inch and they’ll take a mile

How this country has changed – this would have never happened not that many years ago.
What has happened? Is it jealousy, or simply ‘couldn’t care less’? Or stupidly, ‘makes a job for someone’.
No-one seems proud of their country any more – I suspect life is too easy for so many today.

It’s not new and I’ve always thought it a strange British custom. Where I’m from it’s expected to “pack in pack out.” If it wasn’t the norm, then please tell your 20 something know it alls to be that it’s a disgrace to leave rubbish out and to take it away to dispose properly.