Police have made further searches and the first victim of the London Bridge terror attack has now been named. Twelve people were originally arrested by officers in connection to Saturday night’s attack at an address in Barking yesterday. A number of people were also detained today after officers from the Met’s Counter Terrorism Command entered ... 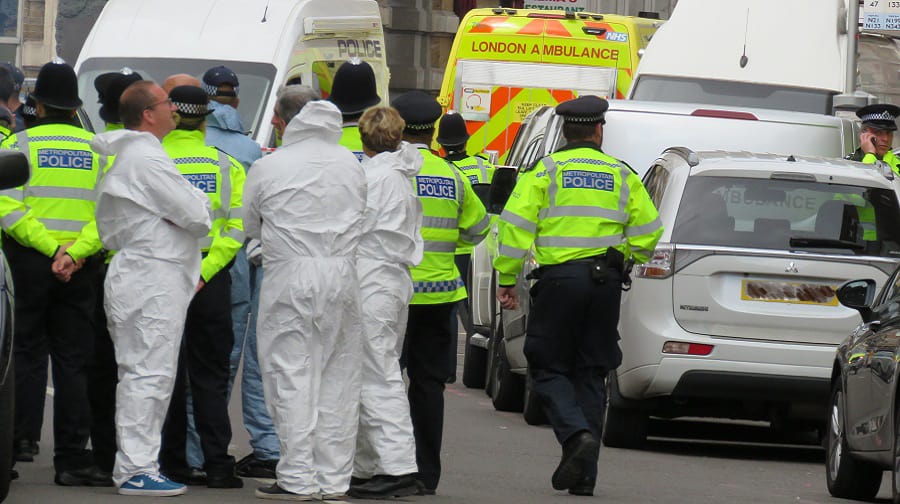 Police have made further searches and the first victim of the London Bridge terror attack has now been named.

Twelve people were originally arrested by officers in connection to Saturday night’s attack at an address in Barking yesterday.

A number of people were also detained today after officers from the Met’s Counter Terrorism Command entered two address – one in Newham and one in Barking – at about 4.15am.

Those detained are being spoken to and police searches continue.

It is known that seven people were killed during Saturday’s attack and 48 injured after terrorists in a white van mowed down pedestrians on London Bridge before crashing outside the Barrowboy and Banker pub on Borough High Street and getting out to randomly stab people.

Canadian Chrissy Archibald is the first victim to have been named following the attack.

The 30-year-old is said to have passed away in her fiancé’s arms after being struck by the white van on London Bridge.

Her family described her as someone who “believed strongly that every person was to be valued and respected” in a statement.

A number of people have also been missing since the attack,

James McMullan and Sebastien Belanger were both last seen outside the Barrowboy and Banker on Borough High Street on Saturday night.

Sara Zelenak, 21, was on London Bridge at the time of the attack and has not been seen since, Frenchman Xavier Thomas is still missing, the family of 39-year-old Ignacio Echeverria haven’t been able to contact him, and Socaine Drz is missing.

Among those injured in the attack which took place shortly after 10pm on Saturday were three Southwark police officers and a British Transport Police officer.

An off-duty Southwark officer remains in hospital in a serious condition today while an on-duty plain clothes officer received stitches for a head injury and a uniformed officer suffered an injury to his arm.

Met Police Assistant Commissioner Mark Rowley said the identities of the three men responsible for the attack would be released “as soon as operationally possible” and that some of the cordons would be released today, Monday.

“The public can expect to see additional police – both armed and unarmed officers – across the Capital as you would expect in these circumstances and our security and policing plans for events are being reviewed, the public will also see increased physical measures on London’s bridges to keep the public safe,” he added.

A vigil is to be held from 6pm to 7pm at Potters Field Park (SE1 2AA) today, Monday, to remember those affected by the attack.

Members of the public will be able to lay floral tributes at the flagpoles at City Hall.

A minute’s silence is also expected to be held across the country at 11am tomorrow.

In a statement, Downing Street said: “The UK will observe a minute’s silence on Tuesday, June 6, at 11am in remembrance of those who lost their lives and all others affected by the attacks in London on Saturday night.

“The silence will be marked at all government buildings and other organisations may follow suit.

“Flags will remain at half-mast on Whitehall government buildings until Tuesday evening.”

London Bridge Station has reopened and Tube services have resumed as normal, however the Borough High Street entrance/exit remains closed.