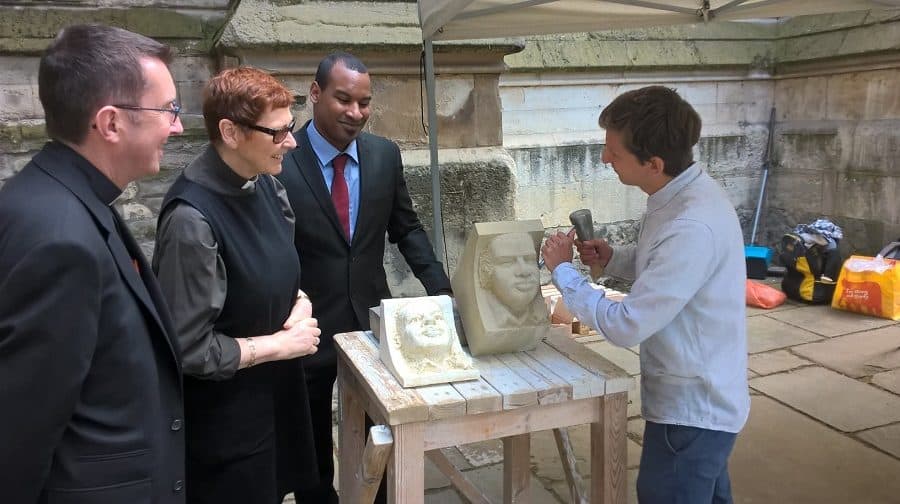 Southwark Cathedral will commemorate the anniversary of the London Bridge and Borough terror attacks with a special Sunday service, Grand Iftar, public art display, and the blessing of a new stone corbel. Visitors and well-wishers are invited to attend the 11am Eucharist or visit the cathedral to light a candle, with the main commemoration service, for victims, friends, families and first responders taking place later that day.

During the service, four new corbels will be blessed, including one depicting PC Wayne Marques, one of the first responders injured in the attack.

Later in the day, the cathedral will host its second Grand Iftar, bringing people of different faiths together to celebrate Ramadan and share what the cathedral describes as “common values of hope, peace and unity and celebrate the diversity of those who live and work in the Bankside area.”

The event will include performances from Borough Market Choir and the Bankside Community Choir, and the first performance of a play written by local writer Michelle Lovric, Suddenly written after interviewing many of the people caught up in the events of last year. Part of the ‘Broken Beauty’ exhibition

From May 21 to June 14, the cathedral’s artist in residence is Alison Clarke, whose work Broken Beauty, now on display, was specially commissioned to mark the terror attack anniversary.

Her installation incorporates prints taken from the Sacristy door which was damaged in the attack, and prints made from other parts of the cathedral worn and damaged over the centuries and in different periods of violence.

Goldwork has been added to the piece in a method influenced by the Japanese craft of Kintsugi, where broken ceramics are mended with gold, acknowledging rather than hiding the past.

A guilt made of men’s cotton handkerchiefs with gold stitching and fragile monoprint tissue is also on display.

Members of the public are invited to bring a piece of clothing to repair and sit, mend, and talk, creating a ‘Mending Circle’, by her installation.

Southwark Cathedral has also commissioned four new corbels – decorative blocks of stone projecting from a wall to support a heavy feature – from the City and Guilds of London Art School historic carving department, based in Kennington.

Master Carver, Tim Crawley, and his students, carved the decorative blocks during the summer in 2017 with the help of children from Cathedral School.

The first corbel commemorates PC Wayne Marques from the British Transport Police who defended those under attack and was one of the first on the scene on June 3, fighting all three attackers with only his baton, and left temporarily blinded from a stab wound to the head.

All four corbels will be blessed by the Bishop of Southwark, the Rt Revd Christoper Chessun, and will remain in situ for generations, as a lasting tribute.

Southwark NewsNewsLondon Bridge one year on: a tribute set in stone for gallant PC Wayne Marques