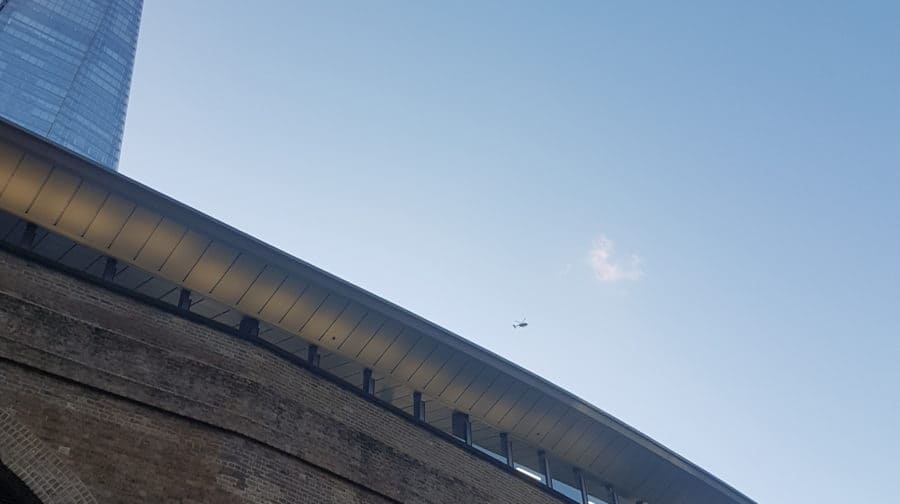 Witnesses have told how they feared for their lives as police responded to what has now been declared a terror incident on London Bridge.

A male suspect has been shot dead at the scene, and a number of people received injuries during the reported stabbing at around 2pm today.

The number of people injured or their condition is not yet known. Police have established wide-ranging cordons to prevent further risk to the public, and have asked that the area be avoided.

Among those affected were husband and wife, Rob and Suzanne Underwood, who had been having lunch in Borough Market on a day-trip from Lincolnshire when the terror incident happened. The view at the scene this afternoon

“There was an awful moment, there was a shout and you saw everyone running for their lives,” he told the News.

“We were so scared when we were lying on the floor and you hear all these stories of people pretending to be dead.

“Then in about two or three minutes it all happened again and people were running the other way.”

Police had entered the market from the opposite end and told diners to clear the area, said Mr Underwood, a 65-year-old freelance broadcaster.

Only moments before, his wife, Suzanne, had remarked on a helicopter hovering overhead the market, but had thought nothing more of it until the incident began.

“I’ve never been so scared,” said Suzanne, who works as a nurse. “I’ve never felt anything like it, it was chaos basically.”

“Before the helicopter was hovering and I said: ‘Why is that’, and then it all happened.”

The couple told of how tourists visiting London got separated from their families during the chaos, including a 13-year-old American who could not find her parents.

The Underwoods helped to call her parents, as she could not do it on her mobile phone. Mrs Underwood praised the quick actions of police and pubic who rallied together, saying: “The police have been remarkable.”

“We all know what’s happened here in the past,” added Mr Underwood.

Another witness, Olivia Bizot, told the News how she heard what she thought was an explosion as she was coming up nearby Tooley Street on her bike.

“I was on my bike coming on my way here when I heard this explosion,” the 22-year-old student said. “But I didn’t realise it was gun-shots. The police came and I saw massive floods of people running.

“I was petrified. I hope people weren’t injured.”

The Met’s Neil Basu said the force’s “heart-felt sympathies” was with those anxiously awaiting news of their loved ones during the terror attack.

He added that the authorities believe a bomb strapped to the suspect to have been a “hoax explosive device” but that further searches are ongoing to make sure the public is safe.

In June 2017, eight innocent victims were killed in a terror attack on the bridge.

The three terrorists involved, who had driven a van into pedestrians before stabbing innocent people indiscriminately, were shot dead by the authorities.