One of the three attackers was known to police and MI5 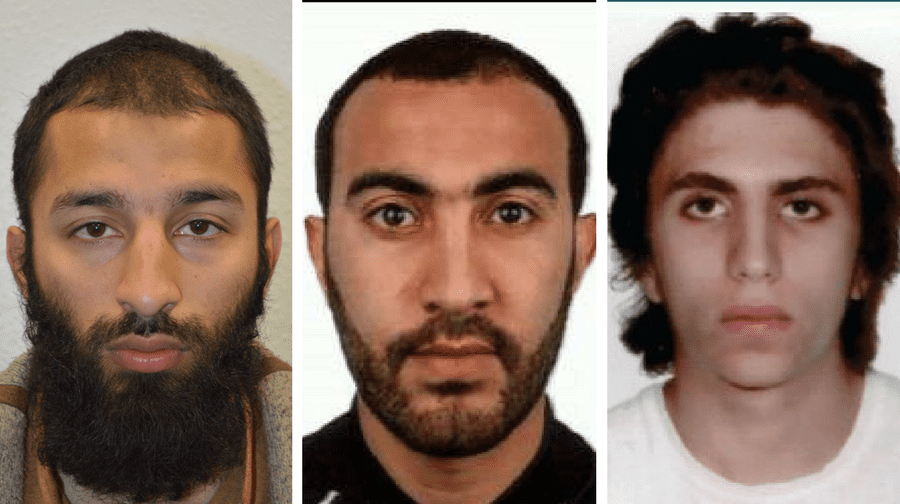 The terrorists who killed eight people and injured dozens have been named by police, while two men continue to be questioned.

Police have released the identities of the three men who mowed down innocent pedestrians on London Bridge with a van just before 10pm on Saturday, June 3, before crashing outside a pub and stabbing people in Borough Market.

Detectives have named the three men as Khuram Shazad Butt, 27, and Rachid Redouane, 30, both from Barking, and Youssef Zaghba, 22, from east London, who is yet to be formally identified.

Butt was a British citizen who was born in Pakistan. He was known to police and MI5, however police say there was no intelligence to suggest that this attack was being planned. He is reported to have worked as a trainee customer services assistant for Transport for London up to October last year, based at London Bridge, but also working at Westminster and Canada Water.

Redouane had claimed to be Moroccan and Libyan and also used a different name and date of birth. He was not known to police.

Zaghba is believed to have been an Italian national of Moroccan descent. He was not a police or MI5 subject of interest.

All three men involved in the attack were confronted and shot dead by armed officers within eight minutes of the first call.

Officers arrested a 30-year-old man on suspicion of the commission, preparation or instigation of terrorist acts at an address in Ilford at about 1.30am yesterday, Wednesday. He has been taken into custody at a south London police station under the Terrorism Act 2000 and a search of the property continues.

Twelve others who were arrested under the investigation have all been released without charge.

Work is ongoing to understand more about them, their connections and whether they were assisted or supported by anyone else.

It is now known that the van carrying the three terrorists ploughed into people on London Bridge at 9.58pm on Saturday, June 3.

It had been a warm and pleasant day and many revellers were out in the popular night spot in Borough to watch the Champions League final which had not long finished.

The van then crashed outside of the Barrowboy and Banker pub on Borough High Street, not far from London Bridge Station.

The three attackers leapt out of the van and ran into Borough Market, entering pubs and restaurants and stabbing people at random.

They were shot dead in Stoney Street at 10.16pm.

Both incidents were declared ‘terrorist incidents’ by 12.25am.

Seven people were confirmed dead by police on Sunday, and on Tuesday the body of an eighth person who was believed to have fallen from the bridge into the river was recovered. Forty eight people were taken to hospital, including two Millwall fans who suffered stab wounds during the attack, three Southwark police officers, and a British Transport Police officer believed to have been the first on the scene armed only with a baton.

Hundreds gathered in Potter’s Field Park, off Tooley Street, on Monday, not far from where the attack happened, to lay flowers and remember those affected by the tragedy.