Some Southwark roads, including Tooley Street, will be closed from 7am and will reopen at 7pm 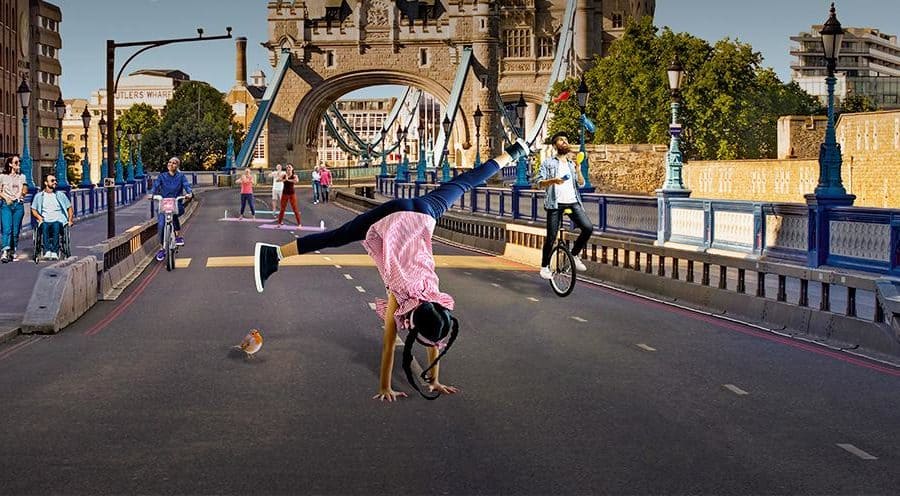 The Car Free Day will see a series of events in central London while roads are closed off (Image: GLA)

Major Southwark roads and thoroughfares will be closed for London’s biggest ever ‘Car Free Day’ on Sunday, September 22.

The equivalent of 200 football pitches worth of roads will be closed off to cars around Tower Bridge, London Bridge and the City.

The traffic closure will allow for a sunrise yoga session on Tower Bridge, as part of range of ‘Reimagine’ events on the day.

“I’m really proud that London will be holding its biggest Car Free Day celebrations on Sunday, and I encourage everyone to join in the fun,” said Mayor Sadiq Khan.

“By enabling Londoners to explore our city without cars and traffic, we will inspire them to walk and cycle as part of their daily routine – something which is crucial to clean up our toxic air.”

“We are delighted to be playing our part in the biggest ever Car Free Day celebration in London, and in helping people explore central London in a new way – free from vehicles and more open for playing, eating and moving,” added Southwark Council’s Richard Livingstone.

“There will be something there for everyone and it will showcase all the things London has to offer, all accessible by walking, cycling and public transport.”

Santander bikes can be hired for free throughout the day by downloading the free Santander Cycles app and using the code ‘CarFreeDay2019’.

Some Southwark roads, including Tooley Street, will be closed from 7am and will reopen at 7pm.

London Bridge and Tower Bridge will also be closed to all general traffic from 7am to 7pm.

‘Play streets’ have also been organised elsewhere in the borough, including in Dulwich’s Melbourne Grove (North). The event will include free ice-cream, face painting and a toy swap.

More information on the events taking place can be found here.