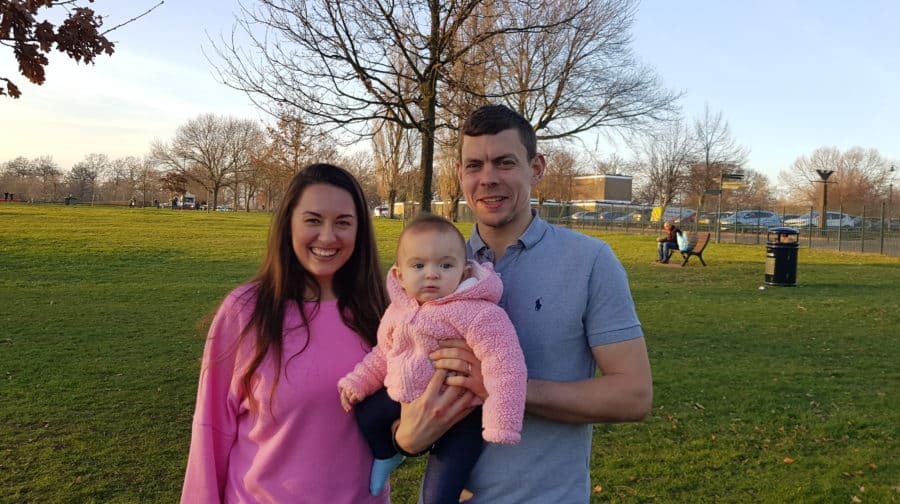 Tom Golding is celebrating his daughter’s first birthday by running the Marathon for the Evelina Hospital – who saved Isabella’s life.

The little girl was born on April 28 last year – a year to the date of the Marathon – but when taken home her doting parents noticed she was lethargic and had saliva bubbling around her mouth.

An X-ray revealed she had rare birth defects affecting her food pipe and airways – which could have been fatal.

Tom, a PE teacher from Sidcup, said: “It goes without saying that our story could have had a very different ending if it wasn’t for the unbelievable treatment and care that Isabelle continues to receive at Evelina London – every single member of staff at that hospital is an angel in disguise.

“Our story is just one of many that happen every single day, so every penny that is donated will help other parents and children get through some of their worst days.”

Tom’s partner, Rebecca, said: “It was horrific and every parent’s worst nightmare.

“We didn’t know it at the time, but Isabelle was becoming really weak because she hadn’t slept and milk and saliva was going straight to her lungs, which meant she was basically drowning.”

She had also signed up to do the Marathon, but will no longer run after the couple found out they were expecting their second child.

Tom 29, said he is dreading it, despite liking sports – but he has an aim to raise every penny he can for the hospital, while also beating his friend’s time.