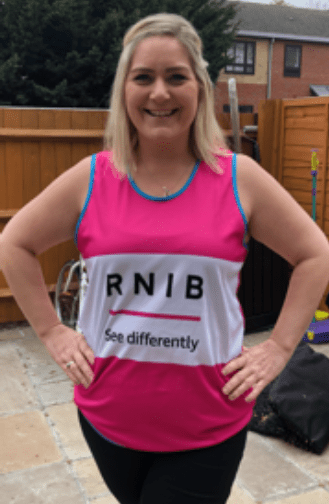 Joanna Ruler, pictured, from Rotherhithe is running her first marathon for the RNIB

Rotherhithe resident Joanna Ruler, aged 37, is running the marathon to raise funds for the Royal National Institute of Blind People (RNIB), the charity that has supported her brother, Danny.

Danny first had problems with his sight in his early 30s, as a complication resulting from diabetes. Later, he was also diagnosed with glaucoma, a sight condition which damages the optic nerve and causes permanent sight loss.

The RNIB had provided Danny with accessible materials to help him during his studies and its Talking Books service.

Joanna, who has never run a marathon before, and only recently taken up running, said: “I’ve always dreamt of running the London Marathon.

“I live on the marathon route and have been attending as a supporter for 30 years.

“Cheering on the runners fills you with a tremendous amount of admiration and gratitude to those fundraising for so many organisations.

“After watching last year’s race, I decided to enter for a charity in 2019.

“Danny always speaks so highly of the support he received from RNIB, so it was the perfect charity for me to support and fundraise for.”