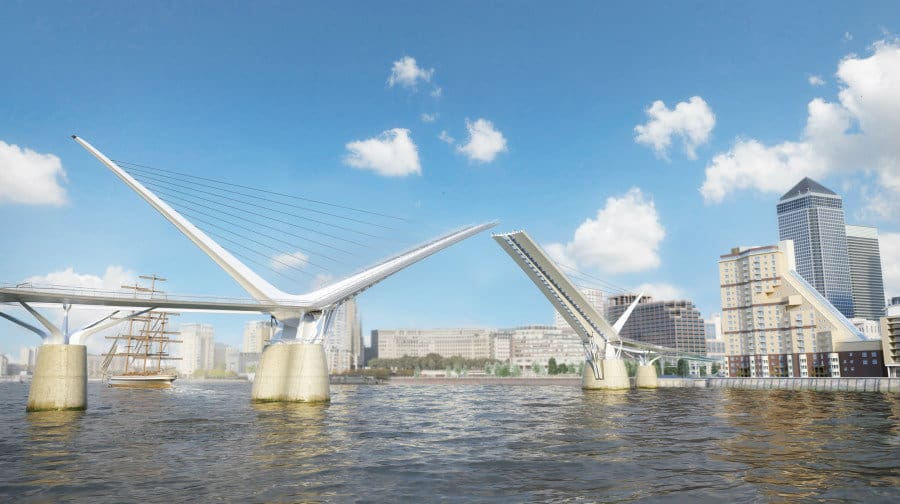 The Mayor of London Sadiq Khan will “accelerate” plans for a bridge from Rotherhithe to Canary Wharf, which could see it open by 2020 as part of a commitment to “greener, public transport-focused crossings”.

The bridge, a key manifesto commitment, would see a much needed pedestrian and cycling crossing built to ease congestion on the Jubilee line, and has received widespread support since its conception.

A competitive procurement process will be held next year subject to funding, availability of land and relevant approvals.

Mayor Khan said: “It’s no secret that London has long needed more river crossings in the east. With new homes and economic growth across East London, it becomes even more important that we deliver new greener transport links that allow Londoners to cross the river quickly and more easily.

“But we don’t want these to have a damaging impact on our environment, and that’s why I’ve reviewed and improved plans for Silvertown Tunnel and why I’m pushing forward with crossings that encourage public transport, walking and cycling.

“As we continue to unlock the massive economic potential of East London, we must secure the very best transport infrastructure that improves the quality of life for everyone living and working in the area.”

Due to the range of river traffic at this location, the bridge would need to open for shipping, and TfL has carried out analysis on whether a bascule or swing style bridge could be more suitable.

Florence Eshalomi, a London Assembly member, said: “It’s good news. We still need to secure funding for it and I think we should scrap the Garden Bridge and use the money for this.”

Neil Coyle, MP for Bermondsey and Old Southwark, said: “We are really pleased. I’ve already been doing a consultation on the bridge on the land around it. We got a positive response from residents. It’s fantastic news. The next bit of the jigsaw is securing funding and setting up strong partnerships.

“It’s really important that the funding arrangements are set up as soon as possible. We need to get all partners around the table, including property developers.”

The news comes as the Mayor set out a package of new river crossings to be built in the next five to ten years that will “vastly improve travel across the capital”.